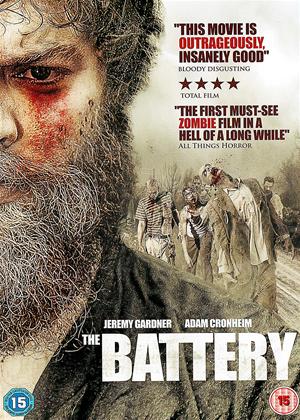 Reviews (4) of The Battery

Initially, the world following a zombie holocaust (which is never really explained – they are just there, and have been for some considerable time) is almost an idyllic one; this story is set entirely in the country, where the creatures are less likely to frequent, according to Ben. He and Mickey are two young men who have been thrown together as a result of the catastrophe, and have formed a spiky, yet amusing friendship, and the lack of structure society now has allows them time to appreciate nature, to go about things at a leisurely pace. Only occasionally, when a zombie is discovered in a car they want to use, or a building they enter, do things become unpleasant – but Ben in particular, has become so casual about the creatures, he will shoot them amidst a conversation with Ben!

There are many set-pieces here that offset the horror with the darkest humour: Mickey awoken from his slumber in the car to find an ‘attractive’ young female zombie attempting to get in, and being unable to resist a round of masturbation as she rubs herself against the window – only to be shocked out of his pleasure as the woman is shot by Ben, who then disappears into the woodland howling with laughter; Ben equipping the sleeping Mickey with a baseball bat as he lies in the bedroom of a house they’ve commandeered and then pushing a zombie into the room and holding the door shut, in a bid to force his friend to overcome his aversion to killing; there is radio contact made with other survivors, but in a cruel twist, these people want nothing to do with Ben and Mickey. The final set-piece is the biggest – trapped inside an immobile van surrounded by zombies. These undead creatures are less violent than in many other films, but the fact remains their bites are deadly, and they never tire – so when hours turn into days for Ben and Mickey’s incarceration, surrounded always by rasping, moaning creatures dolefully attempting entry, it is only a matter of time before a decision has to be made (when we last see him, Ben is staggering away from the marauding masses who seem incapable of catching up with him, with begs the question – why didn’t the two men make a run for it earlier?).

Jeremy Gardner, who writes and directs, is Ben – outwardly a laconic layabout but actually a methodical thinker mentally the stronger of the two; Adam Cronheim plays Mickey, who reveals himself to be finding it more difficult to cope with what has happened and has a longing for female company – indeed, it is that longing that helps cause their downfall. The relationship between the two is the main focus of ‘The Battery’, and they hold attention throughout, whilst the zombies are deliberately kept in the background, their existence commonplace. It presents a different take on familiar backdrop and contains little in the way of blood and gore. With that in mind, it is hugely recommended viewing.

Ok the once - The Battery review by gazmb

Thus was ok but found it quite boring and a little slow. Could of been made a lot better. I managed to watch the film till the end but only just. Story of two friends trying to make it away from the zombies together. One finds it easy ton kill while the other struggles with killings.

Mom, are we there yet? - The Battery review by Schrödinger's Cake

I originally added The Battery to my watch list due to it being tipped as being “the best zombie movie for years” (tm). How could I resist that?

Once the film got underway though, what I found was an enjoyable low-budget film that wisely avoided splurging their funds on lacklustre special effects, and instead opted for the classic just-out-of-camera-shot approach to cracking skulls and blowing brains out. The main focus of the film however is the interplay between the two main characters, as they fight boredom and stumble from one zombie near-miss to the next.

It’s a bit slow in places, but on the whole it is beautifully shot and acted, and has a few memorable celluloid moments of truly insightful dark comedy. On balance, maybe not the best zombie movie of recent years, but definitely worth watching if you like such things.

"Labelled as one of the greatest zombie films in years" Who's the copywriter? Jeremy Gardner's mother? It's dismal, utterly dismal. No zombie frighteners, no humour , certainly no sophistication, and most annoyingly, no plot! Los of effing this and effing that though which for young Americans seems to pass for dialogue these days. American film making is clearly in decline.