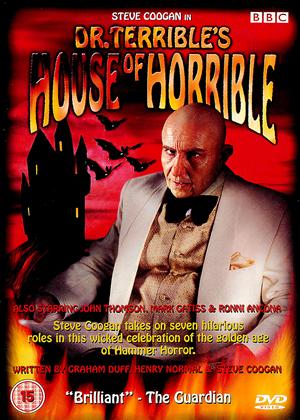 And Now For The Fearing....
London 1972. When a property developer, an architect and a feminist art critic are trapped in a high rise life, their dreams turn to nightmares....

Curse Of The Blood Of The Lizard Of Doom
Edinburgh 1880. Dr Baxter's search for a cure for the common burn sets him on a collision course with his troubled past....

Lesbian Vampire Lovers Of Lust
Carpathia 1877. A newly wed couple find themselves at the mercy of luscious undead ladies....

Voodoo Feet Of Death
London 1930. A ballroom dancer looses his feet in a freak accident with giant scissors, only to find his replacement feet are hell bent on murder....

Scream Satan Scream!
Blackburn 1645. Captain Tobias Slater delights in witch-burning and wench-bedding - until he comes across a genuine coven of evil...

Rent other films like Doctor Terrible's House of Horrible: Series 1

There doesn't seem to much love for this lesser-known Steve Coogan project. Even the lukewarm "Saxondale" was somehow deemed worthy of a second series, but not poor old Dr. Terrible. Which is a shame, because it's not at all bad. As in "Coogan's Run", Steve plays a different character in each episode (as well as our host Dr. Terrible, who pops up at the beginning and end of every story), and as with "Coogan's Run", they don't all work equally well. But the best of them really are splendid one-off creations; the cheerfully hypocritical, lecherous, and utterly depraved Tobias Slater, Witch Locator almost deserves a series of his own. He certainly deserves one more than boring old Saxondale, who got two.

Perhaps the problem was that the series lovingly pastiched films so specific and so out-of-date that the younger members of the target audience simply didn't get the references. Hammer went out of business in the mid-seventies, and by 2001 they were regarded by youngsters as defunct purveyors of crummy old horror movies that dad or granddad thought were good. You have to have a genuine affection for those films to appreciate what this series is trying to do. If you don't, you'll probably laugh more at the films themselves than you will at these parodies of them.

How many viewers in 2001 (or indeed now) would understand that the lesbian vampire episode rips off a trilogy of not exactly immortal films the last of which was made in 1971, and Steve's character is based on the hero of the extremely obscure and not terribly good "Captain Kronos, Vampire Hunter" (1974)? "Doctor Who" got away with a surprisingly similar season consisting entirely of Hammer horror pastiches, but that was in 1977. (And its most famous and/or notorious story, "The Talons of Weng Chiang", is directly parodied here, right down to casting a caucasian as a fiendish chinaman - Mark Gatiss, of all people! It seems there were times when he didn't think Political Correctness was more important than breathing.)

On the plus side, the better episodes - "Voodoo Feet of Death" is undoubtedly the worst - contain lots of the kind of verbal humour you expect from Steve Coogan, and visually it looks extraordinarily like the kind of film it's ripping off, right down to some surprisingly nasty gore. And Dr. Terrible himself is such a monstrously bizarre creation that it's hard to believe he's Steve Coogan. BUt you really do have to understand what the joke is in order to get it.