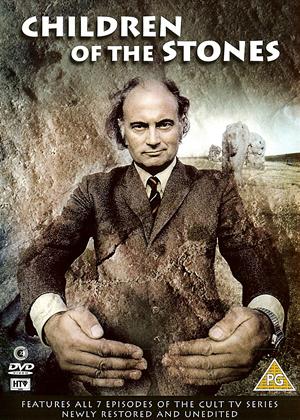 Synopsis:
What is the powerful force that seems to have taken hold of the village of Milbury? Why are the people acting so strangely and why do they greet each other with a trancelike "happy day"?
These are the questions facing Matthew and his father soon after their arrival. The answers lie in the giant ancient stones that surround the village - a circle from which there may be no escape.
Gareth Thomas (Blake's 7) stars in this cult tale of the supernatural, originally broadcast in 1977.
Episodes Comprise:
- Into the Circle
- Circle of Fear
- Serpent in the Circle
- Narrowing Circle
- Charmed Circle
- Squaring the Circle
- Full Circle
Actors:
Gareth Thomas, Veronica Strong, Peter Demin, Ruth Dunning, Iain Cuthbertson, Katharine Levy, Freddie Jones, John Woodnutt, Peggy Ann Wood, Darren Hatch, Ian Donnelly
Directors:
Peter Graham Scott
Studio:
Second Sight Films Ltd.
Genres:
British TV, TV Classics, TV Dramas, TV Mysteries
Countries:
UK

Reviews (1) of Children of the Stones

Classic and genuinely spooky TV drama from ITV 1976 - 5 stars! - Children of the Stones review by PV

I was a little too young to watch this 1976-made drama at the time of broadcast BUT I am so glad to have watched it now - it is FAR more entertaining and effective than most drama on TV today, and happily lacks clunky diversity-box-ticking. This sort of drama wouldn't be made today - FAR TOO MANY nasty white men in it.

These days, the leads would be female and/or black (even when hardly any ethnic minorities live in the English countryside - just watch the new series of Midsomer Murders to see the unrealistic absurdity of that). The BBC has a target for 50% of main roles to be played by females by 2020, so expect endless pc femi-drama from now on. SO we have to look back to the past for great drama like this.

Children of the Stones is classic drama with a classic soundtrack which, if you listen carefully, includes whispers of 'HAPPY DAY' throughout. It's genuinely spooky with great use of the Aylesbury stones location. SO WHAT if some bits look clunky - OB to studio sets. I didn't mind that at all, because the drama was captivating. Reminiscent of the old 1950s version of the Midwitch Cuckoos. Don't bother with the newer Hollywood remake!

This was made in the days when MERIT was all, and quality resulted - which never happens when the whole point of TV drama is ticking the pc boxes.

It's a shame in a way they never made a sequel BUT I hope to goodness they don't make a new version - because they'd do a 'Dr Who' and make all leads female and/or black, with token white men. No thanks.

Special mention for actor Peter Demin who plays the boy Matt who, incredibly, was 17 at the time of filming but looks 13 (films/TV always cast actors who look younger than their years and short - look at Michael J Fox). He made a couple of other dramas but nothing since 1983 (Robin Hood).

This is thoroughly enjoyable drama for kids or adults. 5 stars.