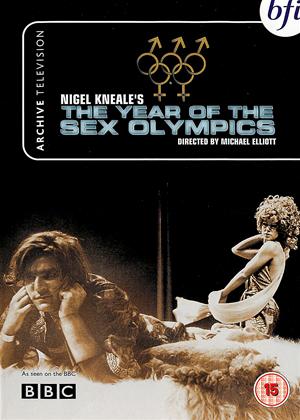 Synopsis:
Nigel Kneale's eerily prescient drama is set in a future when the world is dominated and run by television, where language has become almost redundant and all 'tensions' - love, war, hate and loyalty - have been removed. Overpopulation is a problem, so there are gluttony programmes to put people off food and pornography programmes to put them off sex. There is artsex and sportsex, and now this - the year of the Sex Olympics.
Audience attention begins to wane, however, until TV executive Ugo Priest (Leonard Rossiter) works on a new concept - a reality-based programme in which a couple is stranded on a bleak island, without the aid of any modern technology, and their efforts to survive filmed 24 hours a day. A concept which may sound familiar some 35 years on....
Actors:
Leonard Rossiter, Suzanne Neve, Tony Vogel, Brian Cox, Vickery Turner, George Murcell, Martin Potter, Lesley Roach, Hira Talfrey, Patricia Maynard, Trevor Peacock, Brian Coburn, Derek Fowlds, Wolfe Morris, Braham Murray, Job Stewart, Sheila Sands, Eddie Sommer, Michael Feast
Directors:
Michael Elliott
Producers:
Ronald Travers
Writers:
Nigel Kneale
Studio:
BFI Video
Genres:
British TV, TV Classics, TV Dramas
Countries:
UK

Rent other films like The Year of the Sex Olympics

Reviews (1) of The Year of the Sex Olympics

Future Shock? - The Year of the Sex Olympics review by Count Otto Black

This obscure almost-legendary 1969 TV play from the genuinely legendary and incredibly imaginative Nigel Kneale is in fact not one of his finest hours. It has gained an exaggerated reputation due to the fact that it supposedly "predicts" reality TV, but in truth it does nothing of the sort. This is a blatant rip-off of Aldous Huxley's "Brave New World" with added end-of-the-sixties gloss - the screaming paisley costumes of the male characters and the fact that all the women are apparently painted gold really made me wish the BBC had filmed it in color! The Ancient Greek theory of catharsis - exposing the common people to theatrical representations of horrifically traumatic events happening to somebody else will harmlessly purge them of negative emotions, thereby helping society to function smoothly - is very obviously what inspired Kneale, and the fact that modern technology happens to be involved is just an excuse to turn this into a sci-fi tale. And far from predicting the future, that idea was well over 2,000 years when he pinched it.

As in almost all dramas on this theme, what occurs here is the exact opposite of what happens on contemporary TV shows such as "Big Brother"; it's no spoiler to reveal that the participants find out reality TV is a bit more real than they'd bargained for once it's too late to back out, because that's what always happens. What gives this story its power is the extent to which it pulls no punches at all, though that won't come as a huge surprise to anybody who's read Aldous Huxley. But to anyone familiar with the current output of the BBC, the fact that they used to broadcast material as controversial as this just because they felt they had an intellectual duty to do so may be a bit of an eye-opener.

The cast give it their all, some hampered more than others by the peculiar production decision that in the future everybody will have a vaguely South African accent, but the performances vary from superb (one actor in particular makes you go "uh-oh..." the instant he appears, and never lets up - you'll definitely know that moment when you see it) to downright peculiar. The male lead plays his part so bug-eyed that I found myself looking at his face and wondering if he had a real-life thyroid problem so much that I missed lines of dialogue, and poor old Leonard Rossiter gets another nomination for the sadly non-existent Mister Underused In Futuristic Dramas Award (how many people remember that he was in "2001 - A Space Odyssey"?). But overall this is somewhat patchy, and much less original than some people would have you believe. The last act really, truly does hit harder than you'll expect, but there's some very dated futurism to get through before then.

Overall, this is a dated and very patchy TV play whose ideas are more original in retrospect than they were at the time, with a conclusion which, moving though it is, doesn't really mesh with the mostly blackly comedic satirical drama we've seen up till then. Hugely ambitious, ahead of its time, well worth a look? Certainly. Just don't expect a work of genius you've somehow never heard of until now.