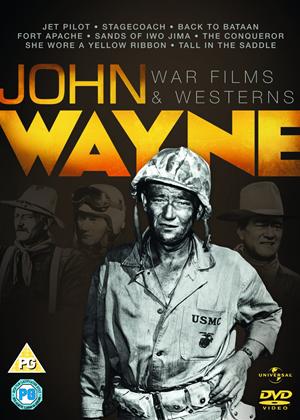 Synopsis:
Back to Bataan
January 30 1945: The Japanese Prison Camp at Cabanatuan is liberated by the Allies. This moving war film shows the courage and personal sacrifice which led to this historic occasion.
Fort Apache
The first of John Ford’s trilogy of cavalry movies set during America’s struggle against the Apache Indian. Henry Fonda plays the stubborn Colonel Thursday whose textbook methods of warfare appear pure suicide to everyone but him. John Wayne stars as Captain York, a soldier experienced in Apache warfare, from whom Thursday will take no advice. The film builds to the inevitable confrontation with the Apache masses, and Thursday leads his men into the lions’ den.
Sands of Iwo Jima
The relationship between Sergeant Stryker (Wayne) and a group of rebellious recruits is made difficult by the Sergeant’s tough training tactics. At Tarawa, the leathernecks have a chance to see Stryker in action, and begin to appreciate him. John Wayne received his first Oscar nomination for Best Actor in this World War Two classic.
John Wayne 1950 Best Actor in a Leading Role, Sands of Iwo Jima Oscar is the Registered Trademark and Service Mark of The Academy Of Motion Picture Arts and Sciences.
She Wore a Yellow Ribbon
In this 1949 classic from director John Ford, Captain Nathan Brittles - cavalry veteran and hero - is about to lead his last patrol. The distinguished of cer, on the brink of retirement, looks back over a life of war, sacrifice and danger, but he is determined to have one last crack at the enemy. With Western stars such as Joanne Dru, Harry Carey Jr. and Victor McClaglen at his side, this is one movie where all the John Ford ingredients are “served, piping hot”!
Tall in the Saddle
There is plenty to enjoy in this fast-moving western with its generous supply of action, romance and humour. Wayne is at his rugged and romantic best as he strives to uncover deceit and injustice in wild cattle county. Wayne plays Rocklin, a tough ranch foreman who arrives in town to take over a new job. He finds himself entangled in a stormy love triangle, a mysterious murder and a second killing for which he has been framed. There are a number of twists in the tale as Rocklin desperately tries to clear his name.
Stagecoach
One of the all-time classic Westerns - considered by many to be the movie that propelled John Wayne to stardom in 1939. The Film is set against the impressive backdrop of Monument Valley in Utah and tells the story of a mixed group of travellers who are making their way across the country to Arizona. They are endangered by an Indian War Party and this, along with their personal histories, results in dificulties. The film pays particular attention to the character studies of the group and is a taut psychological piece which earned an Oscart for Thomas Mitchell’s performance as the drunken doctor. The music also won an Oscar and John Ford and Bert Glennon were nominated for Best Picture. A true classic American western.
Thomas Mitchell 1940 Best Actor in a Supporting Role, Stagecoach. Richard Hageman, W. Franke Harling, John Leipold, and Leo Shuken 1940 Best Music Scoring in a Film, Stagecoach. Oscar is the Registered Trademark and Service Mark of The Academy Of Motion Picture Arts and Sciences.
Jet Pilot
John Wayne and Janet Leigh star in this spy-drama set during the Cold War. The USA and the Soviet Union are mortal enemies and an “iron curtain” divides the free world from Communism. But for an ace American Air Force pilot, played by John Wayne, frosty international relations begin to thaw as the sparks of romance icker following an encounter with a very attractive lady from the wrong side of the iron curtain. Wayne, the embodiment of American values, sticks to his guns, but temptation and duty can sometimes be hard to reconcile...
The Conqueror John Wayne plays Mongol chieftain Temujin, better known as Genghis Khan. The Mongolian warlord must do battle aga
Actors:
John Wayne, Janet Leigh, Jay Flippen, Paul Fix, John Carradine, Claire Trevor, Thomas Mitchell, Donald Meek, Louise Platt, Berton Churchill, Anthony Quinn, Henry Fonda, John Agar, Susan Hayward, Joanne Dru, Victor McLaglen, Ben Johnson, Harry Carey Jnr, Mildred Natwick, George O'Brien
Directors:
Josef Von Sternberg, John Ford, Edward Dmytryck, Allan Dwan, Dick Powell, Edwin L. Marin
Producers:
Jules Furthman, Howard Hughes, Walter Wanger, Robert Fellows, John Ford, Merian C. Cooper, Dick Powell
Writers:
Jules Furthman, Dudley Nichols, Ben Barzman, Richard Landau, Frank S. Nugent, Harry Brown, James Edward Grant, Oscar Millard, Lawrence Stallings, Michael Hogan, Paul Fix, Gordon Ray Young
Studio:
Universal Pictures
Genres:
Action & Adventure, Classics, Drama, Romance