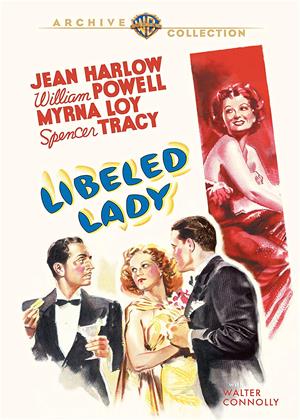 Not released
Thanks a Million

Not released
Topper Takes a Trip

Not released
The Prizefighter and the Lady

Not released
Lloyds of London

Not released
Strike Up the Band

Not released
Just for You

Not released
Rich, Young and Pretty

Not released
When Ladies Meet

Not released
The Richest Girl in the World

Not released
Vogues of 1938

Not released
Road to Rio

Strange that such a big studio (with more stars than there are in heaven) as MGM made so few classic comedies in the thirties.  I think only Libeled Lady ranks among the best of the screwball era. Spencer Tracy is the editor of a tabloid that has accused rich girl Myrna Loy of being the other woman in a divorce in England and she and father Walter Connelly are going to sue the paper for $5m. Because it's not true. Tracy calls in his libel specialist William Powell to marry Tracy's girlfriend Jean Harlow, and then be gotcha'd in the arms of Ms. Loy.

So it's a farce. And it's a great set up. And of course, Harlow falls for Powell and which causes complications. And Powell falls for Loy, which confuses those complications. There's a superb script full of fast talking wisecracks set around the newspaper offices which was probably influenced by The Front Page.

It's Powell's film though, and he's very funny, and sympathetic. He has a chemistry going with all the other stars which no other pairing shares. No surprises that he is so good with Loy, given they starred in 13 films together. The angling scene where he tries to blag fishing for trout with expert Walter Connelly and his daughter is a standout.

This MGM screwball comedy doesn't attempt to challenge the state of the nation. This is a film about the privileges of the super-rich. The only recognisably working class character is played by Jean Harlow, who gets shamefully treated, but it draws very few conclusions in the context of the depression. As a comedy, set in a self contained world of the wealthy, their cocktails and cruises and expensive hobbies and publicity headaches, it's as good as it can be. And Powell restates his position as, until the ascendency of Cary Grant  the best male comedy actor of the thirties.