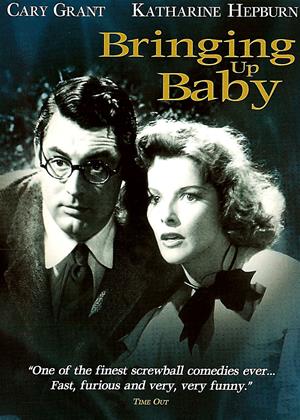 Reviews (4) of Bringing Up Baby

Of course this film's dated. It was made in 1938. But some things never go out of fashion, and one of them is the brand of magnificent silliness on display here. This was the first of the true screwball comedies, and it established the basic formula for most of them: a sensible but vaguely unsatisfied man meets a woman he initially doesn't like because she's an untamed force of nature whose presence causes logic to give up and go home in disgust, but eventually they find true love. And along the way, she accidentally destroys civilization as we know it. Well, near as dammit.

One aspect of this movie modern viewers may not fully appreciate is the amazing amount of sexual innuendo it gets away with. In 1938, you really couldn't be even the tiniest bit naughty if you wanted to stay mainstream. But when you consider the American connotations of the word "bone", it's astonishing how far they push it, and that's one of the more subtle bits of symbolism on display! It's also the very first film ever to get the word "gay" in the modern sense past the censors, because they didn't know what it meant.

Cary Grant is an overly cerebral man fixated on a very, very dead brontosaurus and an explicitly sexless fiancée. Does he need to meet a wildly uninhibited woman who just happens to have a live leopard in her bathroom for basically no reason at all? Personally I think he probably does. Though to be honest, Katharine Hepburn is so completely out of control that I fear for him! The two leading actors give it absolutely everything. And they're ably supported by the best animal acting I've ever seen that doesn't involve CGI. Baby the leopard is an effortless scene-stealer; one look at his lovably gormless face and you'll wonder why pet leopards never caught on. And the dog Asta, billed here as a character named George, went on to support William Powell and Myrna Loy in the entire "Thin Man" franchise. Although this movie doesn't show us his ability to do back-flips on command, Asta has his finest moment here, in a scene they definitely wouldn't dare to film nowadays in case it went horribly wrong. You'll definitely know it when you see it...

It's old, it's naïve, and it's an absolute delight. Sometimes the prototype is better than the numerous modern retreads. Do yourselves a favor. Revisit a more innocent age when a grown-up movie could go completely bonkers without dumbing down or grossing out. You'll thank me for it in the long run.

One of my favourite films... - Bringing Up Baby review by CP Customer

I simply cannot recommened this film enough, it has to be one of the funniest films from one of the classiest film duo's of all time. The crazy antics go from searching for an escaped tame leopard named baby, to encountering a rabid circus leopard, to searching for a dog who stole a dinasour bone from zoologist David(Grant)! Sounds strange I know but when put together this is one comedy that should definaately not be missed.

The laughs are non stop and the physical comedy in the film is excellent, although screwball comedys are not to everyone's taste, this bizzare plot and timeless one liners are sure to make even the most grave viewer smile.

Bringing Up Baby although 50+ years old is still as fresh as ever. Cary Grant and Katherine Hepburn are at their acting prime. Their comic timing is interplanetary travelling perfect. The story gets more and more complicated, but one never loses track of its development. Baby is nothing else but a young tame leopard_ or should I say two? because at one point a not-so-tame leopard joins the fray. There are misunderstandings and mishaps galore. The gags, both verbal and physical pile upon one another at vertiginous speed, and help make this an accomplished Hollywood comedy, to rank with Some Like it Hot, or The Apartment.

Completely mad but played as if it wasn't. - Bringing Up Baby review by ND

This is the genius of this film. Enjoy watching Hollywood greats at the peak of their powers, it's formidable, requires concentration but is so rewarding.

I particularly enjoyed Walter Catlett as Sheriff Slocum, it's a fabulous turn.

The other reviewers are absolutely right, watch it, it's a jewel.