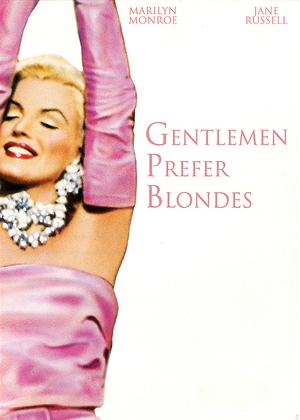 Sign up
Laurel and Hardy: Sons of the Desert

Upon which Monroe became a legend. - Gentlemen Prefer Blondes review by Steve Mason

Musical version of Anita Loos' durable 1925 novel via the Broadway stage updated from the jazz age to the hedonistic fifties. Marilyn Monroe is Lorelei Lee, Jane Russell plays Dorothy Shaw, two showgals from Little Rock, Arkansas. Lorelei is a gold-digger, Dorothy a sort of she-wolf, both travelling by liner to Paris with the boys from the USA olympics team, and an elderly gent (Charles Coburn) who owns a diamond mine. Predictable chaos ensues.

Neither Monroe nor Russell was a dancer and they kind of wiggle and sway through the film in synchronicity, singing half a dozen pretty good musical numbers, including the legendary showstopper, Diamonds Are a Girl's Best Friend.

There's a very funny script by Charles Lederer heavy with innuendo, and Howard Hawks of course is a comedy great, but the film succeeds because of the performances of the two stars. They produce fascinating characterisations, particularly Monroe, playing a sort of distorted femininity.  Its look probably influenced the future of drag more than mainstream chic.

It's completely weightless, and its values are materialistic, mercenary and soulless. But it is hilarious, irreverent and unique. It's the film that made Monroe a major star and the original good time blonde that would be copied across the world. What she does, I'm not sure it's acting at all, or even sexy. But as far as the Hollywood comedy is concerned, she heralded the start of the consumerist fifties.