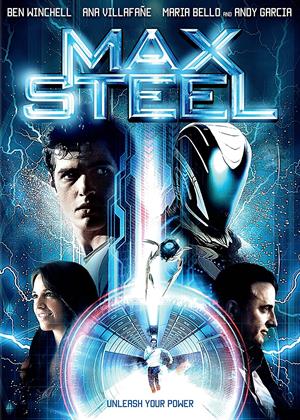 Talk about too little too late. Mattel most likely took a look at Hasbro’s rising success with adapting their toy properties into movies and knew they had to develop something. A Barbie or He-Man movie would seem most likely, but they instead chose Max Steel in 2009, to be developed by the same studio that purchased Hasbro’s properties, Paramount. An odd choice considering Max Steel’s relevance hadn’t be iconic or noteworthy since 2000. And after years in production hell and a shelved final film, Max Steel is once again doomed to be forgotten as a toy line not bound for the cinema or pantheon of toy legends.

The fault mostly lies in Max Steel being one of the most generic of toys in design and story. See if you’ve heard this story before. Max (Ben Winchell) is the new teen in town and misses his lost father. He quickly starts noticing he has strange powers of alien energy and that a local science facility may be looking for such power. Into Max’s life comes the small robot Steel (voiced by Josh Brener), a sly and silly entity that feeds off the energy Max exudes. When Steel attaches himself, he transforms average teenager Max into the power-suited superhero Max Steel, looking like the knock-off Power Rangers toy you buy at the dollar store.

Max’s powers are nothing all that extraordinary and what he does with them is not all that impressive. He has the power of some quantum energy, but it does little more than create computer-generated smears in his suburban town. He has super strength but only seems to use it for testing them out in an abandoned warehouse perfect for smashing concrete pillars and practicing parkour. Max can also fly in the Steel mode, but not until the end of the movie because there clearly wasn’t enough of a budget for that.

The villain is made for Max Steel considering he’s just as dry and forgettable. Dr. Miles Edwards (Andy Garcia) wants that special power possesses and reveals in a surprise twist the truth about Max’s father and his superpowers. Of course, this will result in Miles assembling his own evil suit and seeking a means of conquering the world. What else is new?

Whatever lore of Max Steel there is to spin a story from, the movie plays itself so straight and by-the-numbers that I’m shocked the film even made it to theaters. Nothing is remarkable about this film. Max is so unbelievably average in his school life and home life that I questioned why he even needed powers to begin. There’s nothing to grow with him, even with the most pointless of traits such as his love of bikes and girls. I’m only assuming these are his passions because he shows no greater interest in anything else in his life. His mom (Maria Bello) is such a complete waste of a parental figure that only speaks in forced lines about jokingly threatening to cut off the internet and playfully stressing that moving isn’t so bad. His father (Mike Doyle) is just as tiresome, forced to be nailed to a device where he can be drained of all energy and exposition.

Even if not compared to the current superhero cinema landscape, where origin stories need more than just cool suits and special effects, Max Steel is a fast-food garbage film that should have died in the heap of direct-to-video shlock. If Hasbro’s movie and TV adaptations of their toy lines were advertisements masquerading as movies, this film is more akin to a slapped together billboard to promote the product. The fact that it took seven years to make that billboard is the saddest part.