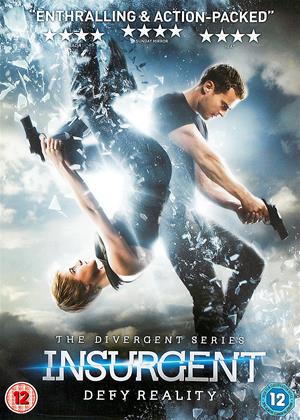 ok the once - Insurgent review by gazmb

I enjoyed this film but its probably one that I won't remember in a few months , didn't really keep me interetsed enough.

As young adult novel sagas continue to push their way into cinemas in the wake of Harry Potter, there is bound to be some confusion in the franchises. The Divergent series has a bit of deja vu to its scenario. Didn’t we just see this movie a few months ago under the title The Hunger Games? Divergent is yet another dystopian society tale of a chosen young girl to break the corruption, but has garnered a considerable popularity at the box office (not as massive as Hunger Games, but still up there). Kids these days sure love their Orwellian fantasies. I don’t know whether to feel impressed or depressed by this fascination.

What I do feel for Insurgent isn’t much of anything all that engrossing. It proceeds through many of the expected cliches as we follow hero girl Tris (Shailene Woodley) hiding out with the rebel forces of an overly-controlled society. She flees through a forest with her travel companions from pursuing forces, guns blazing. Scenes like these are so similar to The Hunger Games that you expect Tris could have run into Katniss in those woods. Her hair is cut during her time on the lamb fulfilling that old rite of passage. She is not welcomed with open arms by the other factions of this society who favor turning her over to the evil organizations that desire her.

The antagonists, however, don’t want her because she’s a menace. It turns out they’ve discovered an ancient data device that can only be opened by Tris and is said to hold the keys to wiping out the Divergent caste. To open this puzzling box of technology, Tris needs to be hooked up to some sort of holographic vision of her psyche, via tentacle-like wires that descend from the ceiling of a sterile room, to trigger the box’s secrets. This is where all the special effects budget went as Tris finds herself dashing around an apocalyptic urban landscape with buildings flying and crashing into one another. I could’ve got behind the way this system plays with her perceptions - at one point she hallucinates her rescue with gun-toting rebels storming the experiment room. If it didn’t go on for so long and proceed so predictably, this could’ve been a very trippy experience.

I will attest that Insurgent does feel more self-contained and fulfilling in its second film. One would think that whole intimidation of rebels to draw out the hero would occupy the entire running time, as was the case with The Hunger Games: Mockingjay Part 1, but I was surprised to see that arc conclude. Even the arc involving the MacGuffin device of great knowledge is cracked open by the end of the film to make a massive change in the story instead of ending on an unsatisfactory cliffhanger. Doing so keeps the story moving and changing as opposed to long and drawn out to milk more cash from the franchise.

That being said, I wasn’t all that engaged with the characters who do little more than fill the expected roles. Shailene Woodley does a fine job at portraying the hero the way she is thrown into situations that bring out tough emotions, but still allow her to show enough bravery. She is put on trial with a truth-telling drug, but struggles with trying to bury her dark past deeds when questioned by a council. She fights the truth back with painful tears and stressful anxiety that appears more intense than weepy. But most of the time her character is strolling with blank stares of forlorn concern in between impressive set pieces. The rest of the cast never breaks out either from the hunky muscle (Theo James), to the weasley coward (Ansel Elgort), to the cold business woman who thinks nothing of human lives (Kate Winslet). Everything just fits into place too neatly, as orderly as the society that Tris strifes against.

I just wish there were that extra oomph to push Insurgent out of the standard young adult trope garden. If only there were a bit more character, a better defined plot or even just a surprising action scene, this really could have been a standout of the sub-genre. All the pacing is there with the editing, but the film seems to work so hard to maintain its running time and source material that it forgets to steer. Dystopian action/dramas should be more about taking in the weight and enormity of their world - not racing to the finish line to please the fans of the novel.