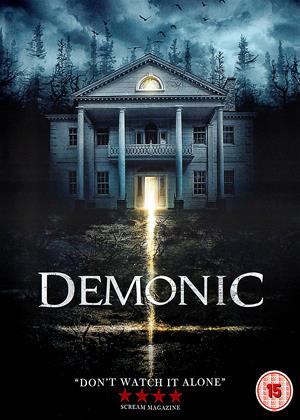 After a terrific opening involving a charismatic cop Detective Mark Lewis (Frank Grillo) investigating a houseful of apparent corpses, we flit back in time to find out how the tragedy occurred. Here, my heart momentarily sank, as it seemed we were to be treated to the dreaded ‘group of friends’ prevalent in films like this: fast-talking picturesque teens all bitter and moody because of some banal relationship disaster (one of the number, Michelle (Cody Horn) is secretly pregnant). But luckily, ‘Demonic’ only flirts with such soap-operatics to establish the characters before flitting back and forth to an interview with the only survivor, John (Dustin Milligan). Such back and forth shenanigans ensure you have to pay attention, which is of course, No Bad Thing. John, the poor sap, is being interviewed by psychologist, Dr. Elizabeth Klein (Maria Bello), who informs him he may go to jail as a result of the carnage and no other suspects.

I enjoyed this for many reasons. It’s dark and gritty, like a supernatural version of something like CSI and other punchy police dramas the US do so well. It is also set in Louisiana, a locale that brings happy memories of ‘The Mummy’s Curse (1944)’ – it may be by the Kharis association, but the raw, humid, swampy location seems to work well with this kind of horror. Also, the acting is universally good, with the young cast soon shaking off the shackles of initial worries concerning precocious, bland stereotypes. The production as a whole is polished and foreboding, faced-paced and atmospheric. Will Canon does an excellent directing job; all scenes are packed with visual interest that highlights every cobweb and speck of dust in the ramshackle house.

As the title suggests, demonic rituals appear to have been carried out at the remote house the five friends investigate. Unwisely, a séance is carried out which appears to unleash all kinds of spirits, none of them you would want to share an elevator with. Familiar jump-scare-tactics – upturned crucifixes, slamming doors, hideous faces in mirrors, use is even made of found-footage filming to confound what we think we know – all of these are used restrainedly and against a backdrop of convincing grit and gloom. There’s even a twist ending.

‘Demonic’ doesn’t set the world on fire, but is a fine, solidly produced way of spending 83 minutes.

Pretty Average Possession movie. Group of Stupid Young Adults gather at supposedly Haunted House where a Famous Mass Killing by someone claiming to have been Possessed went Crazy ,have a Seance and wonder why people are being killed left right and center ...Doh! Pretty Obvious Twist at the end .

Entertaining for a short while then I got pretty bored with it .