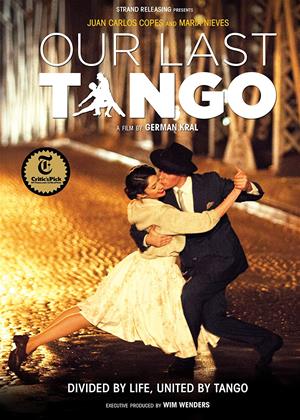 Synopsis:
"Our Last Tango" is a story of love between the two most famous dancers in tango's history. And the story of their tremendous love of tango. María Nieves Rego (81) and Juan Carlos Copes (84) met when they were 14 and 17, and they danced together for nearly fifty years. In all those years they loved and hated each other and went through several painful separations, but always got back together. Now, Juan and María are willing to open up about their love, their hatred, and their passion.
In 'Our Last Tango' Juan and María tell their story to a group of young tango dancers and choreographers from Buenos Aires, who transform the most beautiful, moving and dramatic moments of Juan and Maria's lives into incredible tango-choreographies. These beautifully-shot choreographies compliment the soul-searching interviews and documentary moments of the film to make this an unforgettable journey into the heart of the tango.
Actors:
María Nieves Rego, Juan Carlos Copes, Melina Brutman, Johana Copes, Leonardo Cuello, Alejandra Gutty, Juan Malizia, Pancho Martínez Pey, Pablo Verón, Ayelén Álvarez Miño
Directors:
German Kral
Writers:
German Kral, Daniel Speck
Aka:
Un tango más
Genres:
Documentary, Music & Musicals, Special Interest

Reviews of Our Last Tango

Our Last Tango is a great reminder of why documentaries like this exist in the first place: to celebrate human emotion in all its glory; to bring together people with same passions in same rooms; and to document how dancers María Nieves and Juan Carlos Copes embody that passion into extraordinary results by ways of the Argentine tango. It’s imaginative, poignant and everything you’ve ever asked from your dance class, but were never able to experience it yourself – this musical feature is to be praised for years to come.

To those uninitiated, Juan Carlos Copes and María Nieves have mostly become famous via popularizing South American dances on American TV during the 60s and 80s. They were vibrant, energetic and everything young people should strive to be. Unfortunately, Copes' unfaithfulness off-stage eventually led to the duo’s decay as the World saw them breaking up both as dance and romantic partners. A great loss indeed: but one that will spur and inspire many – mostly Juan Carlos Copes who decided to go on without his former partner. This was a tough decision at the time and Carlos knew it, but his high spirited persona just couldn’t make it stop dancing, so he moved on to conquer new heights without María Nieves.

Matter in fact, German Kral’s Our Last Tango features several genres at its disposal, where life imitates art and vice versa. Important to notice is how Copes’ on and off relationship with María was by no means equal in reciprocity, since his doings, more often than not, put her second to his personal needs. The director recognizes this and plays with it, using the subject as an axis around which everything else revolves in the lives of these two creative giants. In this regard, Our Last Tango hits the nail right on the head.

Furthermore, the film explores in-depth Copes’ inventiveness in and around tango and how he managed to adapt the dance to fit his personal preferences. But, by no means is this only his story. Writer Daniel Speck, together with German Kral, makes sure to show both ends of the spectrum by delving into the life of Copes’ muse through smart instances of her electrifying tango moves. It’s just as the body language speaks for itself, and I couldn’t get enough of it.

Our Last Tango elicits nostalgia of long lost dreams as we watch the two octogenarians narrate their personal details in front of a camera. In their prime, these two people shared many things, broke many and got together again – only to be greeted by the same issues that were plaguing their former selves.

To sum it all: Our Last Tango will move you to tears, period.