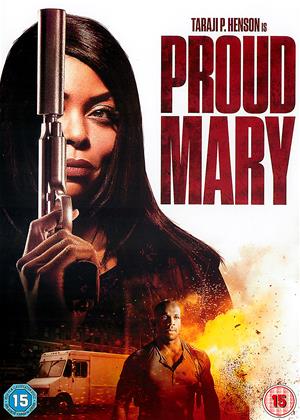 It was peculiar that one of the first films of 2018 to have a refused critic’s screening was an action picture that looked like it had potential. Having seen the poster for months, I was mildly looking forward to the film being presented as a throwback to classic female-led blaxploitation. The poster gives off that vibe. The trailer gives off that vibe. Even the first few minutes of the film offers a promising opening credit sequence that sets the tone of swank and sexy. But once that sequence ends, it becomes painfully clear that the style has been shirked for a film that replicates more of the monotony of 1970s action pictures than their more vivid allure of presentation.

Taraji P. Henson plays Mary as an assassin with a troubled past and a motherly side waiting to be unearthed. Her latest target turns out to be someone with a kid and Mary has some guilt, knowing that this kid may be headed down a dark path if she doesn’t intervene. And, naturally, she’ll step in to slap some sense and love into him just before he heads for an early grave but not before he masters aiming guns and extorting money for others. Mary will save him but first, she’ll have to save herself from corrupt men using her, including Danny Glover acting more sinister than I’ve seen him in quite some time.

That’s not a terrible story but it’s unfortunate that the script goes entirely clinical for this approach. Characters speak far too direct in all of their intentions and actions, suffocating out any blink of subtlety. In this sense, it’s a film that’s best served up for those who can’t easily follow Mary’s drive and motivation for what she does. She’ll spell all this out in pointlessly blunt detail for both the kid and Glover, as will every supporting character. Wondering how the kid feels about all this? He’ll break it down for you. Wondering exactly Glover wants out of Henson? There’s a scene specifically made for him to spoon-feed his I-own-your-soul speech, only far less elegant.

It’s exceptionally unfortunate that the film relegates its giddier action sensibilities for the bookended segments when the action and car chase finally take off, rocky and late as they may be. Until that ending, we’re stuck with a very passive action picture where everything is done to further the plot rather than the characters. The only scene that feels as though its trying to be genuine is an artificial display of Henson’s motherly love by talking with the kid about how much she loves hot dogs. Hallow and stupid but, hey, at least it’s one scene where they’re not talking bluntly and abnormally about their feelings and the darker path of guns and violence. It’s especially insulting that the only moment which feels the most natural between the two is a scene that plays over the credits. Why drown out what is easily the most relatable scene of the film?

Think how much potential Proud Mary could have had if it only had the guts to embrace a style rather than a boring script with standard action? What if embraced that Coffy esque style of the 1970s era with a more vivid use of modern setting and color to weave something all-together original. What we get instead is a tease for what could’ve been, where Henson is relegated to more of a tired action movie cliche than a play on action movie cliches. And thus the film comes off more as a paycheck when it may have been assembled with heart but ultimately comes out the other end as just another action picture with no voice of its own.