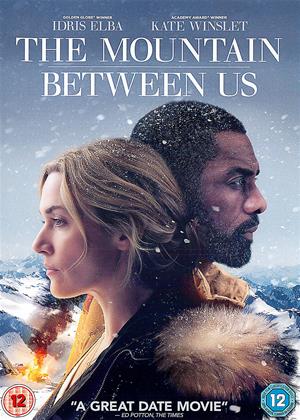 Reviews (14) of The Mountain Between Us

What a waste of time! There was no tension, shock, fear, worry or surprise in any part of this film. And definitely no chemistry between the leads. Kate Winslet has always struck me as a boring and talentless actress since I first saw her in 'Titanic'. She has absolutely no charisma and I would rather watch paint dry. Idris Elba is normally reliable, and goodness knows he tried, but he was let down by a ridiculous plot and boring story not worth making a film about. Why did I watch it? We tossed and my friend won.

Still thinking - The Mountain Between Us review by GH

What action there was happened in the first 20 minutes. After that 2 boring talking heads stuck on a mountain. Turned off after 30 minutes.

Disappointing melodrama - The Mountain Between Us review by Alphaville

After a promising plane crash in the mountains this turns into a soapy luvvie-fest between survivors Idris Elba and Kate Winslet. Much of it takes place in constricted dark spaces at night – the plane, a cave, a shack – as they get to know each other. Interestingly, the trailer shows none of this… for good reason.

Idris is more convincing than you’d think in a more dialled-down role than usual, but Kate with an American accent is at her most actorly. Nor does the inane dialogue do them any favours as they spend the film wittering and squabbling endlessly. They’re even stuck with a mutt whose annoying whimpering matches theirs.

As their cloying relationship develops you won’t need a spoiler to tell you where it’s going. There are opportunities for an interesting ending but the screenplay typically bottles it. For Milles & Boon fans only.

Painful - The Mountain Between Us review by AL

What a drag and no chemistry between the leads at all. Ditto what already been said above. No tension and didn't really care if anyone did. Having said all that, it was nice to see Beau Bridges in something, haven't seen him for ages.

I loved this book and was looking forward to reliving it through the film. I was sorely disappointed. The film uses the story line of the book as a base and misses the fundamental emotive parts that made the book so moving. The film itself was watchable, but I hated the ending!

I liked the dog ! - The Mountain Between Us review by AB

Not such a awful film i thought it was going to be not great either .. Watched until the end as the acting ok but really not very interesting. The dog held my attention all they way through as i thought they may eat him . Very clever at finding dry fire wood not sure we ever saw them light a fire but one always appeared..

Landscape adventure - The Mountain Between Us review by CW

Unlike other reviewers, I really did like this movie. I was glad afterwards to watch the interesting special features explaining how the movie was made. Having not read the book I cannot compare the two but did see that the author worked with the script writer. To me, the chemistry of the 2 actors worked. I found it believable. There were omg moments gasping at the danger they were in trying to survive in the snow, freezing temperatures, running out of food. Yes, the dog looked healthy and frisky for one starving but we would have all been furious if an emaciated dog had been used. I liked that for the most part the actors did their own stunts and the movie was filmed on location. For me his was a most entertaining adventure/ survival story. I don’t know about ending in book but though sentimental, I think the ending worked well.

a mountain between us - The Mountain Between Us review by KM

Kate Winslet and Idris Elba have really good chemistry and they relationship develops in a very good way.

Dull. Only plus point was the backdrop Lovely mountain views. It was so unpredictable. We chose this film on strength of idris Elba but the storyline did not give him much scope to shine.

The Mountain Between Us review by Mark McPherson - Cinema Paradiso

For a film all about a disaster where a trip doesn’t go according to plan, The Mountain Between Us goes almost exactly according to plan. It throws together Idris Elba and Kate Winslet in a scenario where they must try to survive the harsh cold but not so harsh they can’t bond a little in a film that slowly turns from gritty survival drama to a rickety romance. Let’s just say Elba and Winslet fair much better than the environment.

Elba plays Dr. Ben Bass, a neurosurgeon with an emergency operation to meet. Winslet plays Alex Martin, a photojournalist with a wedding to attend. Both are in a hurry and when the airport can’t offer them much, they seek private pilot Walter (Beau Bridges) to fly them towards their destination. Unfortunate for them, Walter didn’t file a flight plan and dies while en route. The jet crashes and the only survivors of Bass and Martin, with the addition of a dog in tow, must brave the harsh winter on a mountainside. And over the course of the film, they’ll both learn how to survive and perhaps grow to love each other.

The more the film goes along, the clearer it becomes that it doesn’t have the sharpest of teeth to be a standout of the survival dramas. Consider how Alex finds herself alone with the dog when a mountain lion comes trotting into their makeshift camp of the jet’s fuselage. The dog is the first notice this new creature and Alex hears the dog get into a scuffle outside. In any other film, that dog would be toast and once the lion retreats, it’s a matter of deciding whether or not to eat the dog. Don’t worry, folks; the dog it okay. Just a minor scratch that a skilled surgeon such as Bass can easily dress. Lucky dog.

And there are plenty of lucky breaks for the trio. They don’t have much food and their flares are sparse. They know they’ll have to start hiking and do so soon after tending to their wounds and packing up. And though face a danger of bear traps and cracking ice, both of them seem to come through rather well. They don’t appear to be either starving or deeply frozen as they edge closer to civilization. It isn’t too long before they discover a cabin and can take a break from the survival aspect for a bit of that romance to sink in.

This is such a timid survival picture I doubt it’d be much of a spoiler to mention that the dog makes it out of this scenario relatively well. Aside from the pilot who receives an unceremonious burial in the snowy mountains quite quickly, the film presents itself more as an unorthodox drama which seems more concerned of Elba and Winslet will hook rather than if they’ll survive this ordeal. Because once they do, the film quickly switches gear into a very strange type of romance of them both running into each other’s arms. So if you were hoping for the two of them to spend more time risking their lives than genuinely connecting, you may be dismayed to discover that the usually powerful Elba only comes out of this experience with a mere scar.