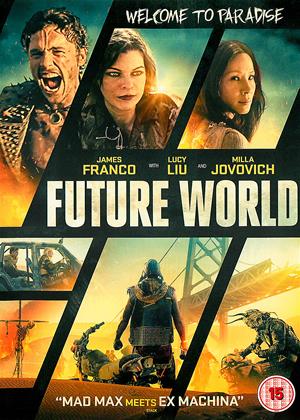 James Franco tries his hand at a post-apocalyptic Mad Max-type movie, directing himself as a motor bike pack leader with bad teeth, and the result is equally bad. The plot, in which a prince from The Oasis tries to reach Paradise Beach with a female robot for medicine to save his dying mum is ridiculous. None of it makes any sense. There are slo-mo druggie scenes, Lesbian scenes, sleazy brothel topless dancer scenes and too many close-ups of Franco’s teeth.

Most of the 84 minute film features Franco and his mates riding their bikes aimlessly across the desert landscape. The Sonoran Desert of Southern California is beautifully filmed with a smoothly tracking camera, but it soon feels like watching an endless motocross documentary.

In the realm of post-apocalyptic terror rides where motorcycles gangs run rampant and society descends into bloody chaos, Future World is a nasty gunk of genre runoff. It’s overburdened with cliches, dressing up the world in the expected gas masks, machetes, and bicycles that I wondered why the film even bothered having a prologue to explain how humanity collapsed. We don’t really care and neither do these characters. All they want is a means to survive, get high or kill in their cartoonish wasteland not cartoonish enough to be a hoot in the vein of Mad Max or an homage akin to Turbo Kid.

Consider the odd worlds the three central characters occupy. For James Franco, he’s a gang leader that takes delight in slaughtering innocents for resources, letting blood spill on the dusty ground while he cackles with nasty teeth. Compare that with the plight of Prince (Jeffrey Wahlberg), a boy that resides in apparently the one glorious paradise that all nukes and gang leaders haven’t found, where all is clean. Ash’s mother (Lucy Liu), dressed in her freshly laundered gown, is dying and the village doesn’t have the right medicine, leading to an adventure for Ash across the wasteland for a cure. Now take a gander at Milla Jovovich as a drug dealer/leader of her chemist compound that looks more like an abandoned mansion in a pre-nuked world. The presence of people in gas masks doesn’t exactly sell this setting either.

Complicating Ash’s mission and serving as a connecting device is the android Ash (Suki Waterhouse), a sexy-looking cyber creation with different colored eyes to make her more believable as a humanoid robot. Franco wants her for sex and murder. Jovovich wants her for sex, or at least her engineer does after a night of robot lovemaking. Prince wants her because she makes for good protection, despite breaking down during an escape. There’s also a friendship born between Prince and Ash but without any chemistry. Ash could have had some personality for trying to understand the broken world she was activated into but she offers little more than eye candy, appearing goofy at times the way she model-runway struts when going on the hunt.

The world is so ill-defined and yet seems far too predictable as well. A neon club of booze and hookers is run by a pimp played by Snoop Dogg in his typical pimp persona, smoking up, slapping women and calling his sex slaves bitches. Jovovich’s drug villa seems to specialize in developing recreation drugs and crucial cures, but her operation appears as a cheap beer-making operation at home. And while it was interesting to see Jovovich with more lines past her usual glaring and low voice from the Resident Evil movies, she slips back into martial arts master when she loads up on drugs to jump into combat.

Future World doesn’t really have anything to say or new to explore in the doomsday genre, nihilistic in its desire for post-apocalyptic action. Without the B-list talent assembled, it would be just as forgettable as the glut of lesser end-of-the-world movies, without grit or intensity, easing so casually into the genre it's downright dull. Yes, as strange as it sounds to talk about a Mad Max style James Franco and an adrenaline-junkie Milla Jovovich as boring, it’s just that. One hopes the future won’t be so cliche.