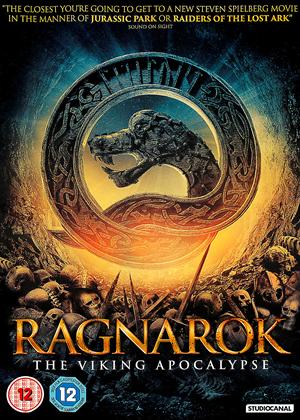 Synopsis:
Sigurd is an archaeologist who, for years, has been obsessed with the Oseberg Viking ship. He believes that a runic inscription on the ship, which translates to "man knows little", holds the key to understanding the Norse myth of Ragnarok: the day when heaven and earth are destroyed. When his friend Allan finds similar inscriptions on a stone from the north of Norway, Sigurd, along with his kids, begins an expedition to uncover the secret of the day of doom. Little do they know, a discovery far beyond their imaginations awaits!
Actors:
Pål Sverre Hagen, Nicolai Cleve Broch, Bjørn Sundquist, Sofia Helin, Maria Annette Tanderø Berglyd, Julian Podolski, Jens Hultén, Terje Strømdahl, Stefan Cronwall, Marika Enstad, Vera Rudi, Kyrre Haugen Sydness
Directors:
Mikkel Brænne Sandemose
Producers:
Are Heidenstrom, Martin Sundland
Writers:
John Kåre Raake
Aka:
Gåten Ragnarok
Studio:
StudioCanal
Genres:
Action & Adventure, Sci-Fi & Fantasy
Countries:
Norway, Action & Adventure, Sci-Fi & Fantasy

Reviews (1) of Ragnarok: The Viking Apocalypse

An adventure yarn set in northern Norway, where Pal Sverre Hagen and party go in search of the Viking myth of Ragnarok (a Nordic Godzilla). It’s well set-up, with Hagen a single parent to two children, all of whom act with an engaging naturalism often missing in Hollywood films.

The plot develops an edge when it turns out the monster might be real and there are some exciting moments, especially in a tense set-piece on a zipwire over an ominous lake. The film has no pretence to being anything other than a good old-fashioned creature feature and on that level it works better than most. The special effects, straight out of the 1950s, add to the fun.

From Norway, comes the awesome 2013 film Ragnarok. It is a Family, Adventure, and Fantasy film that combines vikings, myths and legends, and a vast adventure. It is the kind of film that I absolutely love, and I would recommend it to anyone.

The film begins with the Vikings on the Oseberg Viking ship. Known for its pillaging and raids, present-day archeologist Sigurd Svensen (Pål Sverre Valheim Hagen) is sure the Viking ship will lead him to their ancient treasure trove. Fascinated with the idea of Ragnarok, the Norse mythology apocalypse, he ventures into ‘No Man’s Land’ - the land between Norway and Russia - with his two colleagues and two children. This adventure will be one they will never forget...if they make it out alive, that is.

Let me begin by saying that the cinematography was brilliant. The use - or lack of - lighting was thoughtfully done. You felt like you couldn’t quite see everything, and didn’t know what was lurking in the shadows. The sets were also amazing. The capturing of the awesome landscapes was flawless, making it feel like a truly other world and time.

Seemingly little things like the costumes and props held a lot of detail, making the film more believable. The script was also smart and held some funny moments (“Finland!”).

The casting was spot-on. While I obviously love watching my favourite actors getting more film and television work, I do feel more connected to a film where I don’t know any of the actors, because then I can better imagine they are these characters. I must commend the child actors, who more than held their own against the adults.

The use of visual effects in this type of film is a vital element. The anticipation and knowledge that something scary was there, and yet unable to see it, was excellent. The hints at the massive looming creature made it more frightening. We catch glimpses of something lurking that we knew was much bigger than we could tell. But even when we did see what the creature was, the visual effects didn’t let it down. It definitely rivals a lot of the recent Hollywood feature films.

The only downside might be the fact it is in another language. This might not be what some people like to watch, or they might have trouble following along. I, personally, don’t usually like them because you have to look away from the action to read and might miss something, but it shouldn’t be a reason not to watch this film.

The film has received very mixed reviews. Online reviews have been positive, but general audience responses has been quite unsatisfactory.

It might not be the newest and most-unique idea, but it is an overall good and entertaining film that will be enjoyed by all members of the family, and that is why I give it a well-deserved four out of five stars.