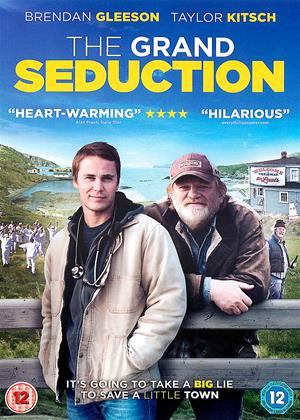 Reviews of The Grand Seduction

The Grand Seduction is a fantastic American remake that - despite the name - is not a romantic comedy. It is not a film where we see one person trying to romantically ‘woo’ another, but is about a quaint fishing town trying to entice a young doctor to remain.

The film is about a small fishing community called Tickle Cove. They were once a thriving community, but when the jobs leave, so does the town’s identity. When Dr. Paul Lewis (played by Taylor Kitsch) arrives, Murray French (Brendan Gleeson) takes every chance he can to convince the young doctor that stay permanently. Not only will the residents benefit medically, but the doctor’s presence will enable a new factory to open and employ the struggling townsfolk.

At first look, I was confused as to what this film would be about. With a title like ‘The Grand Seduction’, you would imagine a young good-looking couple to grace the cover. Instead, we have Taylor Kitsch (who is of course young and good-looking), with Brendan Gleeson (who plays Murray French in the film). Was this going to be a different sort of romantic comedy than I was accustomed to? Well, no. This is a remake of the 2003 French-Canadian film La Grande Séduction. I normally hate remakes and find them unnecessary, but not having seen the original, I was able to really get into this film. The story was engaging, the dialogue was witty and funny, and the characters were interesting. Underneath all of this, you find a whole other layer. People are - in real life - struggling with job-loss and the affects of lack of proper medical help for smaller communities. By creating a charming little world for this film, the writer (both of the original and this remake) has found a way to softly bring the issue to everyone’s attention. They have done a good job.

The casting was also superb. I have loved Taylor Kitsch in Friday Night Lights; I loved him in Battleship; and I love him in The Grand Seduction. He has shown he is capable of playing a myriad of different roles, and that it does not matter to him whether it will be a Summer blockbuster release or not. Brendan Gleeson plays the other lead character in the film, and is a perfect contrast to the fresh-faced Kitsch.

The film has been generally well-received by critics and audience members. The main point of contention has been that it is a remake, but that seems to be more of a loyalty standing and less of anything actually wrong with this film.

The Grand Seduction is a cute, entertaining, and funny film that you will enjoy. All elements work well separately and together, and it can be enjoyed by the whole family. It is charming, it is heart-felt, it is funny, and it is a film you should check out.