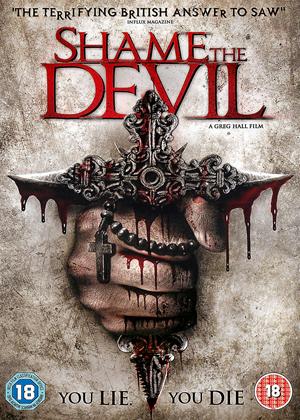 Synopsis:
James, a London detective who finds himself working a serial murder case, attempts to put a stop to a gruesome series of terrifying massacres. The killers unique method sees his victims believing they have the chance to live... all they have to do is tell the truth. It soon becomes apparent that James is the key to everything. Someone is trying to send him a message, but who? With his wife pregnant with their first child, he has everything to lose.
Actors:
Simon Phillips, Juliette Bennett, Will de Meo, Bradford West, Doug Bradley, Kellie Shirley, Peter Woodward, Peter Barrett, Lucy Clements, Jack Murray, Martin Fisher, Leo Goodman, Thomas Worthington, Warwick Evans, Charlotte Lewis
Directors:
Paul Tanter
Producers:
Toby Meredith, Simon Phillips, Paul Tanter, Alain Wildberger
Writers:
Paul Tanter
Studio:
Signature Entertainment
Genres:
British Films, Horror, Thrillers
Countries:
UK

Reviews (1) of Shame the Devil

‘The truth will set you free. Shame the devil’.

A disembodied, distorted voice ingeniously fits various torture devices to its victims and then encourages them to tell the truth and ‘shame the devil’. If they tell a lie, something messy happens to them. This is most successfully employed at the very beginning of the film, when a hapless grocery store manager manages to scrape through the test unscathed by admitting to an affair. When his wife arrives on the scene and finds him strapped to chair with a rifle pointing at his face, and a lie detector strapped to it, she vows to get help. “I love you,” she says. “I love you,” he replies. BANG! The store manager no longer has a face. It’s a gruesome and darkly hilarious moment. It’s also the most horrific scene in the film – something Director and Writer Paul Tanter seems aware of, as there are interminable flashbacks to that scene throughout.

The rest of the film is more of a detective thriller, with London Detective James (Simon Phillips) intrigued by the case, and then obsessed by it, as events seem to be trailing him around, eventually ending up in New York and the lovely Sarah (Juliette Bennett).

This is a decent film, which could have done with some more gruesome moments. It starts off very much as a ‘Saw’ type of film, and then becomes something less horrific, but still interesting, with a good twist at the end. It is interesting in a film concerned with making people tell the truth, how the finale sees James defeated by a lie.