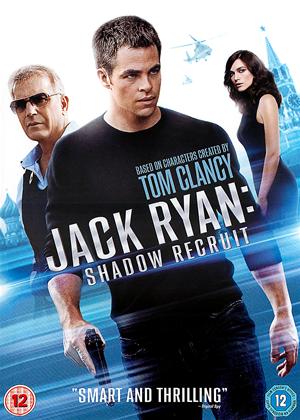 We enjoyed this film, very much like Bourne which is a good recommendation. Once the pace picks up it hurries along with a good plot and lots of action.

I have never been a huge fan of the Jack Ryan films but this re-start was actually quite enjoyable and watchable. Chris Pine is great in the lead role and it was nice to see Kevin Costner back in a major film again. Although Keira Knightley was given little to do, she made the most of a part that would have been redundant with a lesser actress. The action scenes may have all been before but they are thrown together well and I would definitely like to see a sequel with the same actors involved.

I was hoping for better - Jack Ryan: Shadow Recruit review by RP

If you want to watch a moderately tense action thriller along the lines of a 'Bourne' film crossed with '24', then this may be just the thing for you. On the other hand, if what you are looking for is a thoughtful, technically detailed film where an analyst is suddenly placed in a position out of his depth - in other words, a 'proper' Jack Ryan film, them you won't find it here.

Jack Ryan is a character in a series of novels by the late Tom Clancy - there have been a dozen or so books and five films have been made. The first four are 'The Hunt For Red October' (1990) in which Jack Ryan is played by Alec Baldwin, 'Patriot Games' (1992) and 'Clear And Present Danger' (1994) in which Harrison Ford played the role, and 'The Sum Of All Fears' (2002) in which Ben Affleck took over the reins. This latest film is a reboot of the franchise after a gap of 12 years, this time with Chris Pine in the role.

Chris Pine has done good work in the latest reboots of the 'Star Trek' franchise so perhaps it seemed a good idea to use him here. Unfortunately, he becomes part of the problem - too good looking, too young - and when coupled with the lightweight Keira Knightley putting on a fake American accent and the 'wooden' and now somewhat elderly (for a CIA field man) Kevin Costner it all becomes a somewhat unlikely mix.

The storyline is new and not based on any of Tom Clancy's work - but when I say 'new' I mean newly written, because frankly it's a mish-mash of rehashed old tosh. A Russian oligarch is planning the downfall of the good ole USA via economic disaster caused by (1) first, buying up dollars (2) causing a terrorist attack on Wall Street (3) dumping the currency in the immediate aftermath. It takes young Jack Ryan - and (of course) only him - to notice this dastardly plot, to fly to Moscow to confront the baddie, break in to his offices, steal computer data, have a high car chase round Moscow and defeat a sleeper-cell terrorist attack back home in New York. He does this (of course) single handedly while Ms Knightley screams prettily and Mr Wooden Costner moves stiffly (well, he is approaching 60) as a backup action man.

Kenneth Branagh, who also takes a role as the Russian baddy, directed it. Sir Kenneth is a 'proper' actor - and in comparison to the rest of the cast, it shows. He is head and shoulders above the other players and makes an excellent baddy. But even he - and his directing skills - can't save the film

If you sit back and let it all wash over you, then you might think its good, all-action, stuff . But for me it's not thoughtful, not analytical enough, with too many silly action sequences, ridiculous technology, and a ridiculous plot. My favourite Jack Ryan is Harrison Ford, who both looks and acts the part. Whatever his other qualities, Chris Pine doesn't.

I'll give it 2/5 stars - it's OK, but I found it quite disappointing. I was hoping for better.

While the career of Jack Ryan on the big screen has been hit and miss with some terrific Harrison Ford instalments in Patriot Games and A Clear and Present Danger and a dire Ben Affleck starrer in The Sum of all Fears, I was excited to see where director Kenneth Branagh would take this classic character, a spy without a penchant for violence, an analyst in over his head.

The film follows Jack Ryan (Chris Pine), an ex soldier who is recruited by the CIA when his tour of duty is cut short unexpectedly. While he is told his position will be just as an analyst he finds himself wrapped up in a russian plot against the US where his life is in danger and he is forced to think about who he can really trust in this business.

That may sound like an oversimplification of the story but it’s not, Shadow Recruit is just that shallow. Sure the action is entertaining, some of the performances are good with Pine making a good if uncharacteristic Ryan and Kevin Costner bringing a stereotypical mentor come to life with a kind of sickly sweet calmness, but the whole thing is too safe, nothing happens that shouldn’t happen, there is never a moment when the next move isn’t glaringly obvious making the whole film an exercise in spotting which action movie cliche is coming up next.

Director Kenneth Branagh is stuck in this generic action thriller and while he tries to spice things up with some Paul Greengrass-esque directing with plenty of shaky cam and other quick, nauseating editing tricks, he makes it so hard to make out much of the action that it forces you not to care even a little bit.

The biggest problem however is Ryan himself, a man not used to the field and not quite equipped for it, a man who reacts to a situation with logical thought despite his lack of training. Right from the get go Pine’s Ryan is different, he’s a soldier, he is equipped to handle these situations and it ruins the core of the character, a character who defeats his enemies by the skin of his teeth. Pine does it without breaking a sweat and ultimately after some terrific features like Patriot Games and The Hunt for Red October, Jack Ryan has been co-opted for a film that really doesn’t deserve him