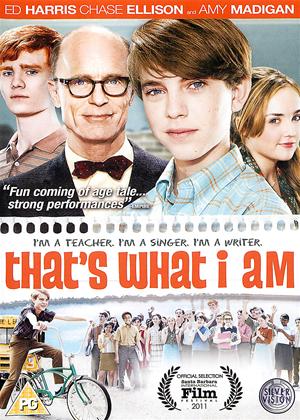 Reviews of That's What I Am

That's What I Am review by Melissa Orcine - Cinema Paradiso

California 1965. Andy Nichol (Chase Ellison) is 12 years old and has just entered eighth-grade. He is eager to learn and even finds an ally in everyone’s favorite teacher, Mr. Simon (Ed Harris); they inspire each other – Andy to study more and Mr. Simon to teach better. But Mr. Simon is accused of being gay and instead of fighting back he decides not to dignify this affront with any definitive answer.

Andy’s situation gets more challenging when Mr. Simon assigns him to partner up with Stanley Minor aka Big G – Big because Stanley’s too-tall for his age group and G stands for Ginger for his bright red hair. Bullied and outcast by their classmates, Andy experiences injustices from the kids around him as Mr. Simon gets his from the adults. ‘That’s What I Am’ is an earnest look at a young boy’s entry to adolescence.

Written and directed by Michael Pavone and produced by WWE Studios – yes, the movie ‘That’s What I Am’ is a project of the wrestling organization that wants to expand its entertainment empire. You wouldn’t expect this from WWE but sure enough, it cannot help but cast one of its own in a small role (wrestler Randy Orton stars as a homophobic father of one of the students).

Ed Harris plays an understated character and he does it with much subtlety it seems he’s not even trying at all. His chemistry with Chase Ellison and his real-life wife Amy Madigan who plays Principal Kelner give the movie a delicate touch. Chase Ellison as Andy is a natural; he will be one of the stars to watch and he finds an equal in Alexander Waters being Big G, who shows the sturdiness and vulnerability of a child being bullied.

‘That’s What I Am’ is a movie about bullying, which is a big issue then and continues to be to this day. It however Disney-fies the serious circumstance a tad because of how upbeat and ‘The Wonder Years’ it sounds, with an adult Andy narrating and recalling such a painful part of his young life fondly.