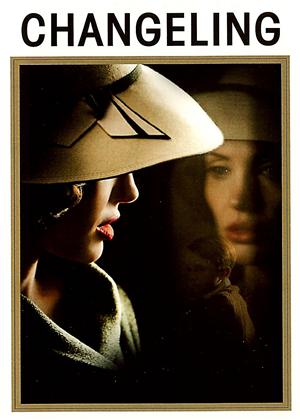 Overlooked by the Oscars - Changeling review by CP Customer

The most frightening aspect of Changeling is that it is based on a true story. Angelina Jolie as any mother would identifies with her character, a mother searching for her son. It is a touching and at times heartbreaking story, helped by Jolie’s standout performance and strong support from John Malkovich. The 1920’s have been wonderfully recreated onscreen and Eastwood allows the story to unfold with minimal interruption. His directing style is clinical here, as this isn’t a tale that needs cutting edge techniques, he simply allows the events to unfold. This film warrants inclusion alongside his best work. After watching the Changeling, you’ll want to know more about Christine and the origins of the story. Sadly the extras fail to offer anything in this respect, a detailed documentary would have been most welcome in the overall package, however the film itself is excellent.

A must see - Changeling review by CP Customer

I was not looking forward to watching what is basically a Hallmark style film. However this is so well done it does leave you slighly aghast at the corruption of the US of A at this time. Well acted but so well directed you never get bored.

If this film wasn't true it would be unbelievable even for a movie. Angelina Jolie gives an outstanding performance as the wronged Mother, who will not swallow the so called truth that the powers to be try their best to enforce upon her.

Clint Eastwood captures the era perfectly in his direction, and brings out the best of Jolie as the woman who will not lay down.

This is a top class movie and Angelina Jolie thoroughly deserved her oscar nomination.

I hope Gran Tourino is better than this! - Changeling review by CP Customer

I was very disappointed by this film. It was very melodramatic and cliched in places, and dragged on unnecessarily. It was also very heavy handed with it's themes of police corruption and justice etc. It was self-important; and suggestive of an awards baiting film, with grander intentions, than the material deserved.

The initial intriguing idea, is soon replaced by an average narrative showing scenes we've seen a dozen times before in other films, and could have been skipped over. Overall a very ordinary, and by the numbers film. Couldn't they have been more respectful to a true story?! And not simply prised it into typical thriller conventions?

It reminded me to some extent of some self-important films from the 50s and 60s that the Airplane! team used to spoof. Is Clint Eastwood as a director now that old fashioned? With due respect for much of his back catalogue, to me this is a serious mis-step.

I really enjoyed watching this film, Angelina Jolie plays the role of the mother who does not give up searching for her son extremely well and if you haven't read any spoilers the film is not predictable. It's hard to believe that the film is based on a true story when we believe to be 'civilised'.

Not a fan of Jolie but an admirer of Eastwood I was uncertain about this. At its worst it is a film about a lost boy (lots of young child actors who are unconvincing) and a child murderer. At its best it is a period piece (San Francisco 1928) featuring police corruption. I think this film is probably aimed at a female audience but there is enough drama in it to keep most people wondering if it is really all true. The SF police officers are quite brilliantly detestable.

Very focused in this film and I was compelled to watch till the end...well worth the time viewing, a beautiful true story.

Angelina Jolie plays an excellent part in this film based on a true story. I thought from reading the story previously that this would be a hard to watch movie due to the subject but this was not the case. Worth a watch with a box of tissues.