Rent The Blind Dead Collection: Return of the Evil Dead (1973) 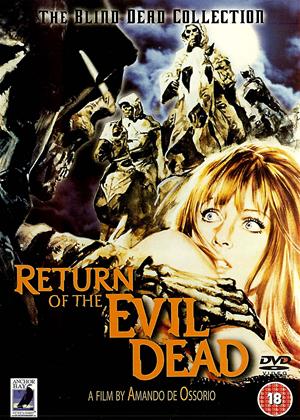 Rent other films like The Blind Dead Collection: Return of the Evil Dead

Reviews (2) of The Blind Dead Collection: Return of the Evil Dead

The Blind Dead series is very much hit and miss. Enjoying a revival when the films arrived on video then DVD. This film is well shot and utilises historical locations to good effect, with some bumps and scares thrown in for good measure. The real issue is perhaps what attracted many to the film in the first place i.e. the Templar knights. Time has been extremely harsh to this once elite guardians. Now they move with zombie-like speed and staggered gaits. They lack any fear factor, undermined by some ropey effects, resulting in the Blind Dead becoming more of an oddity than a worthwhile horror.

It is an odd decision to have this film open up with scenes of how the Knights Templar became known as The Blind Dead, and then some way into the running time, have those scenes repeated as flashbacks as someone (in this case, ‘village idiot’ Murdo, played by José Canalejas) is relaying the story of their origin.

However, this second film in the Blind Dead series sees Director Amando De Ossario once again making the titular creatures as revolting as cowled, decomposing skeletal zombies can be – although their withered, twig-like hands rarely look anything other than gnarled gardening forks held by the actors beneath the rotting robes and look particularly ineffective when trying to grab various victims. In fact, the cadaverous knights can be astonishingly inept here: usually their agonising slowness adds to their menace – here, a whole group of them completely fail to capture the terrified, screaming Monica (Loretta Tovar). It might be their most ineffectual scene and reduces their effect greatly. Later on, however, a horde of the Knights Templar storming the village present a far more persuasive presentation of their powers.

This is another enjoyable instalment in the series. Each entry manages to be more than ‘just another episode’, however, due to Ossario’s inspiring passion for the subject, and ‘Return of the Evil Dead’ is a substantial project in its own right. It perhaps lacks the atmospheric chill of ‘Ghost Galleon’ and ‘Night of the Seagulls’, but the Knights’ relentless, statuesque vigil throughout the night awaiting the emergence of the last few survivors makes for a morbidly enthralling scenario.