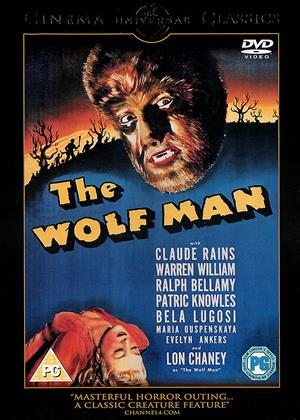 Reviews (1) of The Wolf Man

Lovely big smiley Larry Talbot (Lon Chaney), the unlikely son of diminutive Lord John Talbot (Claude Raines), returns to his vast family home in Llanwelly, Wales, to commiserate the death of his brother John. Whilst idly toying with the magnificent and outsize telescope, he spies Gwen Conliffe (Evelyn Ankers), who runs an antique shop. In an act of astonishingly stalker-like blatancy, Larry is quite brazen about his spying activities and uses it to chat up intelligent, no-nonsense Gwen, who is engaged to dapper Frank (Patrick Knowles). Larry’s not put off by this and continues to pursue Gwen, becoming – in my view - a first class pest in the process.

This is Universal films’ Wales, of course – why a Welsh location was decided on, I don’t know; there’s not a single remotely authentic accent to be heard. But who cares? My sneering attitude does ‘The Wolf Man’ a disservice. This would be Universal’s last A-list chiller. I always think the 1930s were the time of the horror film; in the 1940s (due to changing styles and budgetary considerations), they became monster movies; child-friendly creature-features that are utterly brilliant, but not quite the carefully constructed, intricate exercises in horror from the previous decade. ‘The Wolf Man’ contains a little from both worlds, but for all the light of the full moon, I cannot find the titular creature frightening, unlike his stablemates Frankenstein’s Monster and Dracula.

Despite Lon’s best efforts and some gruelling transformation scenes, the wolf man remains a lumbering, furry Airdale on two hind quarters. The scary qualities this film possesses are in the legends around the shaggy old snarler. Classic Universal’s best autumnal woodlands and sinister town square, pumped full of dry-ice fog and smoke, magnificent Maria Ouspenskaya as Maleva, the Gypsy Fortune Teller: smaller than anyone, yet the most authoritative. Also, Bela Lugosi in a criminally small role as gypsy Bela, with his own tragic story to tell (Lugosi makes a big impression in what is little more than a cameo). Frank Bellamy plays his usual solid slab of unmemorable beefcake decency, in the character of Colonel Paul.

There’s an incongruity – Bela becomes a werewolf, but when we see his alter-ego, it’s an actual real wolf. When Larry, who is inevitably bitten and receives the curse, he sprouts fur and fangs (and the cutest Hobbit-feet and button snout) but retains his human form.

As the net closes in on Talbot, his cheery demeanour slowly becomes enshrouded in uncertainty and furtive misery, which he retains through several sequels. Lon’s acting attracts much comment, some favourable and some unfair comparing with the very different styles of Boris Karloff and Bela Lugosi and others; but he never fails to invest his all into Talbot, his ‘baby’, a finely nuanced, progressive character about which he remained justifiably proud.