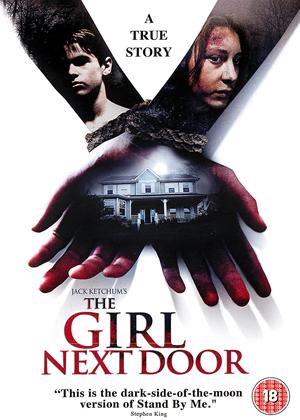 Reviews (2) of The Girl Next Door

Difficult to watch ... - The Girl Next Door review by NP

Based on true events is always a tagline that makes me suspicious. In this case, it makes me nauseous, because I couldn't sleep after watching this, and I've been enjoying horror films for many years.

The most horrific aspect about this story is that there are no monsters (in the traditional sense), no special effects and there is hardly any gore. The miscreant here is a mentally unhinged Aunt called Ruth, and the gang of 'normal' children who are either related to her, or simply call round for a beer and the spectacle of degrading, humiliating and relentlessly torturing Ruth's two young neices. The neices, 16 year old Meg and 10 year old Susan (who is suffering from polio) suffer unspeakable, ritualistic psychological and physical abuse.

The one glimmer of hope comes in the form of neighbour David, who befriended Ruth when she first came to stay.

Half way through this film, I questioned what the hell I was watching, but I felt I had to continue in the hope of a happy ending. The eventual despatch of the unstable Aunt wasn't satisfying. Her exit was nothing compared to the horrors she inflicted on others. What is particularly repellent is that the regime of torture was presented as some kind of game for the local kids, who came to see Meg as a vessel for their own violent and emerging sexual outlets, and even David doesn't manage to summon up the courage to act until it is far, far too late.

This is a stunningly acted film, well directed and with a minimalist score that enhances the degradation and horror inflicted upon the two young girls. I could appreciate that. I could also appreciate the braveness of a film that actually moves and effects the viewer, especially at a time when horror has become so formulaic. But did I enjoy watching it? In all honesty, I hope nobody could.

Horrible - The Girl Next Door review by SH

This film is horrible please don't watch it, that poor girl :( . This film is not entertaining....horrible just horrible!