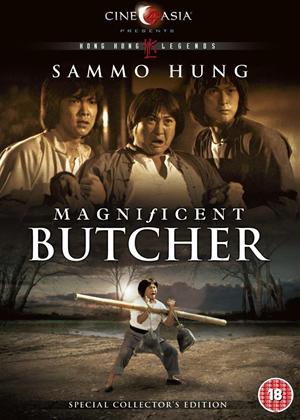 Reviews (1) of The Magnificent Butcher

I'm afraid I couldn't watch very much of this film. It's billed as action, adventure and drama, and was given an 18 certificate, so naturally I expected something a bit dark and gritty. Alas, within literally seconds of the start of the movie, it becomes apparent that it's one of those comedies aimed at people with a mental age of five. I actually had to check that I'd been sent the right film because I couldn't believe that anything this mentally retarded had an 18 certificate. Unfortunately it was indeed the correct movie. I flicked through a few scenes to see if it got a bit more adult later on, and apparently it does. Then I asked myself how many minutes of Sammo Hung's dismal attempts to be funny, aided by his even less amusing supporting cast, I was prepared to sit through to have the pleasure of watching some Chinese men I was already sick of hitting each other. The answer was, fewer than I'd already endured, so I hit the eject button.

An intelligent director can do this kind of thing well - see "Shaolin Soccer" and "Kung Fu Hustle", or the comedy interludes in John Woo's "The Killer". But done badly, as it is here, it's just sub-moronic pantomime face-pulling and hideous overacting from people who probably can't really act. If you have a very high tolerance for Three Stooges-style foolishness, you might enjoy the painful "comedy" you'll have to sit through a lot of to get to the action. And if you think that Sammo Hung's one-note schtick revolving around the fact that he's really good at martial arts despite being slightly overweight is intrinsically hilarious, you might need to visit the lavatory before you watch this just in case of laughter-induced trouser accidents. Otherwise, forget it.