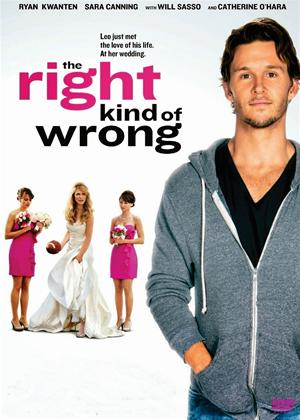 Synopsis:
In this romantic comedy, Leo Palamino is a failed-writer-turned-dishwasher made famous for his many flaws and shortcomings in a blog called "Why You Suck," a huge Internet success written by his ex-wife. Then Leo meets Colette, the girl of his dreams... on the day she is marrying the perfect man. And so, the ultimate underdog story begins as Leo, a fearless dreamer, risks all to show Colette and the whole wide world all that is right with a man famous for being wrong.
Actors:
Ryan Kwanten, Sara Canning, Ryan McPartlin, Kristen Hager, James A. Woods, Raoul Bhaneja, Jennifer Baxter, Will Sasso, Catherine O'Hara, Maria Menounos, Mateen Devji, Maya Samy, Margherita Donato, Arielle Rombough, Valerie Planche, Chris Gillette, Janice Ryan, Christopher Russell, Aadila Dosani, Brendan Hunter
Directors:
Jeremiah S. Chechik
Writers:
Megan Martin, Tim Sandlin
Genres:
Romance
Countries:
Canada

Rent other films like The Right Kind of Wrong

Not released
After Hours

Sign up
Lemony Snicket's a Series of Unfortunate Events

Not released
Searching for Debra Winger

Reviews of The Right Kind of Wrong

Romantic comedies like The Right Kind of Wrong should never work, their plots are complete nonsense, the characters within them rarely connect to any version of the real world and the comedy always comes at the sake of the character as supporting actors like Will Sasso and Kristin Hager are forced to turn their performances into one of overreaching idiocy or unbearable hipocrisy. That being said by the end of The Right Kind of Wrong I didn’t find myself loathing the cliches or the poor characterization, it worked in the films favour and that is down to the inherent wit of the script.

The Right Kind of Wrong follows Leo (Ryan Kwantan),a manchild who refuses to grow up because he thinks he already has. However when he meets Colette (Sara Canning) he falls head over heels but there is one problem, he meets her on her wedding day. This sends Leo on a journey to steal her away from her seemingly perfect husband as he also attempts to re-evaluate his life and become the man that she wants to be with.

While the whole premise reads as utterly mysoginistic the script manages to play on Leo’s inadiquacies to portray him as ever so slightly simple instead of just sexist. His idea of the world however is one to aspire to as he sees the people in his life in a beautiful way making his many excentricities seem almost charming. However its the knowing nod writer Megan Martin gives to the naive and dubious premise that make the film shine as without it Leo’s actions would be outright sickening.

Kwanten manages to make Leo a loveable loser on a quest while taking advantage of every possible moment for a bit of physical comedy while Canning manages to show Colette is more than the idealistic women Martin has written allowing her opportunities to make mistakes and also be spiteful even if it doesn’t suit her personality.

The whole film is unconventional and despite the story it doesn’t play like a cookie cutter rom com instead giving you a look at some seriously messed up people who might well find their way through to something better, but while they do its an awful lot of fun to watch them screw it up.