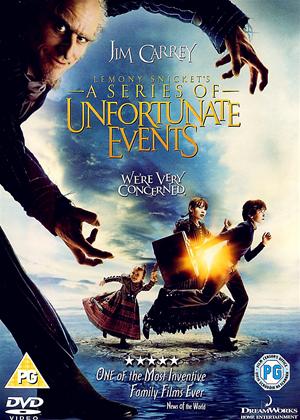 Rent other films like Lemony Snicket's a Series of Unfortunate Events

Reviews (3) of Lemony Snicket's a Series of Unfortunate Events

a series of unfortinate events! - Lemony Snicket's a Series of Unfortunate Events review by CP Customer

this film is based on a sound script

jim karey applies all his acting know how

so cannot recommen this title

Saw other write ups, but watched on projector, with some kids, probably helped, but i really enjoyed the film. Reading the books would help as well of course.

Quite often the kids films appear to be better made than the adults! As have 4 grand children, tend to see them all, and the lack of effing and blinding, and chain saws etc, is quite a relief.

Dustin had two lines in this film, for some reason..........alas prob not get any now the mighty American witch hunt is on. Kevin prob never be seen again? Wonder if he get some more stage work over here? Doubtful, as the media be all geared up...............

This is one of the most disappointing films that I have seen in a long while. Although there were some good supporting performers and some stunning sets, the script is weak, you never get a chance to know or care for the children, and Jim Carrey as 'Count Olaf' is just not intimidating as a villain. Overall, the whole film seemed to be lacking in substance, depth, and character development.