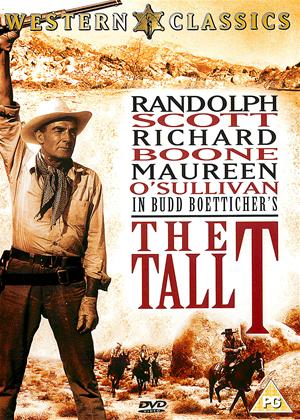 Synopsis:
After losing his horse in a bull-riding contest, rancher Pat Brennan (Randolph Scott) hitches a lift home on the stagecoach out of the frontier town of Contention. At a remote way station, the stage is ambushed by a ruthless bandit gang led by Usher (Richard Boone). They don't intend leaving any witnesses - until they discover that one of the passengers is copper heiress Doretta Mims (Maureen O'Sullivan). Now they want $50,000 in ransom from her father - or everybody dies. As tension mounts almost to breaking point, Brennan must discover a way to outwit -and outgun - the outlaw gang before they murder all of their hostages.
Actors:
Randolph Scott, Richard Boone, Maureen O'Sullivan, Arthur Hunnicutt, Skip Homeier, Henry Silva, John Hubbard, Robert Burton, Robert Anderson, Dick Johnstone, Ann Kunde, Christopher Olsen, Fred Sherman
Directors:
Budd Boetticher
Producers:
Harry Joe Brown
Writers:
Burt Kennedy, Elmore Leonard
Studio:
Sony
Genres:
Action & Adventure, Classics

There are some things a man can't ride around... - The Tall T review by Count Otto Black

One of several highly accomplished westerns directed by Budd Boetticher and starring Randolph Scott, this taut little B-movie uses its modest resources - most of the action involves five people, three of whom are constantly on the verge of killing the other two, uneasily occupying the same tiny shack and small patch of desert - and short running-time to maximum effect.

The plot is riddled with clichés you'll see in many other westerns from this era. The hero and a woman he doesn't know but soon gets to like a great deal, plus the spineless wretch she's initially hooked up with against her better judgement, are accidentally captured by outlaws who don't know what to do with them, but are just barely prevented from killing them out of hand because their leader takes a strange liking to our hero. Of course, nothing's going to save that poor bloke whose main narrative purpose is to die so we know the baddies mean business...

What sets it apart is the way these unoriginal elements are used. Maureen O'Sullivan, who a quarter of a century earlier created a bit of a scandal by playing Tarzan's significant other wearing as little as she could possibly get away with, makes absolutely no attempt to hide the fact that she's 46, and almost every character other than the gallant hero, who's no spring chicken himself, comments on her age and unattractiveness, though even with no make-up and bad hair, being Maureen O'Sullivan gives her an advantage over most middle-aged women. She's also a much better actress than most of the pretty starlets who normally play the love interest in these films, and gets a satisfying amount of character development.

Randolph Scott is his usual self, but he's very good at what he does, which, by the way, includes saying "there are some things a man can't ride around" without making it sound silly. And the opening section is very clever indeed. The jaunty music, the good-natured stupidity of the hero, and the lovably wacky characters he meets, including a truly abysmal child actor, make you fear the worst. But all this frivolity is just a set-up for the abrupt change of tone a quarter of the way through, which, given what we've seen so far, is even more shockingly dark than it would have been anyway. As for the villains, they're so vile, one of them in particular, that their leader's illogical decision to delay killing the hero simply because he wants someone to talk to who isn't subhuman actually makes sense.

It's not a major film and it never tries to be, but it's a very good minor film indeed. And there can't be many westerns that portray shooting people less glamorously than this one does. If you like westerns, don't miss it.

I thoroughly enjoyed this western, having watched it alongside "Ride the High Country", also starring Randolph Scott. I had not really been familiar with Randolph Scott until seeing these films, but rate him really highly having now seen his portrayals of mostly good natured, positive characters. In "The Tall T" the support characters are excellent - a group of believable desperadoes, and an increasingly gritty Maureen O'Sullivan - and it is impressive as to how quickly these are built up in an exciting film of only 74 mins. The screenplay and scenery are top order and there is a satisfying conclusion. I like the way that Randolph Scott gives the same instruction to Maureen O'Sullivan as he gives to Nancy Gates in the film Comanche Station - "just keep shooting".