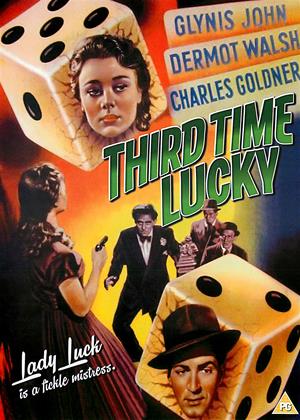 "I don't slap men's faces, I slap the look on them." Not perhaps the sort of line one readily associates with Glynis Johns. In this film, made in

England in 1949, from a novel by Gerald Butler, she finds herself becoming enthralled by a man who goes by the name of Lucky and, as did Lord Lucan, he makes a living at those gaming tables which were then, unlike the Clermont Club, behind the scenes: a wooden flap pulled back before a concealed door swings open to reveal those affecting calm around a large table as the wheel spins and a rake shunts chips to and fro. Needless to say, violence simmers beneath a landscape of cocktail dresses, dinner jackets and bow ties. Much of the film takes place by night, light and shade deployed well, almost up to the standards of those American dark streets. Told in a series of flashbacks, it opens with Glynis being questioned in a hospital about a gun found at the scene - and keeps one guessing throughout. Not a pinnacle of noir, perhaps, but there is plenty to be getting on with here - not least the fruity dialogue between Glynis and the woman with whom she shares modest quarters . What used to be called risqué before the barriers came down.