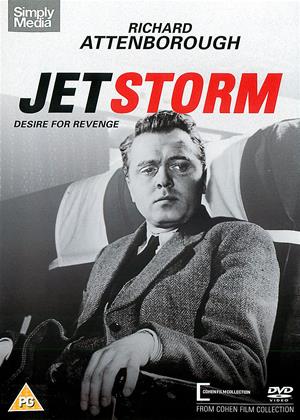 Synopsis:
When Ernest Tilley's (Richard Attenborough) daughter is killed in a hit-and-run, he vows he'll do what it takes to avenge her death. Armed with a homemade bomb he tracks down the killer to an airport and boards the same flight. Once in the air, he threatens to blow up the plane. As they desperately try to find the bomb the dramatic story of each of the other passengers unfolds. Emotions run high as they confront the reality of their situation. A husband confesses to cheating on his wife. Romance blossoms between two flight attendants. A divorced couple realise that they're still very much in love and a widow admits that she never loved her wealthy husband.
Up in the air their fate now lies in their own hands. Can Ernest, a man who has lost everything, be stopped in time?
Actors:
Richard Attenborough, Hermione Baddeley, Stanley Baker, Bernard Braden, Diane Cilento, Barbara Kelly, David Kossoff, Virginia Maskell, Harry Secombe, Elizabeth Sellars, Sybil Thorndike, Mai Zetterling, Marty Wilde, Patrick Allen, Paul Carpenter, Megs Jenkins, Jocelyn Lane, Cec Linder, Neil McCallum, Lana Morris
Directors:
Cy Endfield
Producers:
Steven Pallos
Writers:
Cy Endfield, Sigmund Miller
Aka:
Jetstream / Killing Urge
Studio:
Simply Media
Genres:
Action & Adventure, Classics, Drama, Thrillers

FEAT IN THE CLOUDS - Jet Storm review by CH

Four decades after Airplane!, it can still seem hard to take disaster movies seriously. That is to reckon without Jet Storm (1959) which itself was a decade after Brighton Rock. What is the connection between a film about a transatlantic airliner bound for New York, a bomb somewhere aboard, and one set amidst race-track gangs? In both Richard Attenborough is a troubled villain. He has planted the bomb in hopes of killing the man who escaped a hit-and-run charge after killing his daughter - and among the passengers is Hermione Baddeley, who had also been set against Attenborough in that film set on the South Coast.

These are but two of an array of passengers who board the aeroplane at Heathrow in those days when there were stairs to its entrance, with a chance for photographers to do their stuff rather than be thwarted by the hidden tubes and travelators of nowadays. Their object of attention is Marty Wilde. As the plot unfurls, there is no chance for him to anticipate the guitar-playing nun in Airport and Airplane!, for his instrument has been stowed in the hold.

As a film, this is a lesser one than Brighton Rock but it can equally be said that Richard Attenborough gives a more subtle performance here. To say any more would give away too much (the end has echoes of the earlier film). Within the confines of cabin and cockpit, not to mention another deck which sports, below a spiral staircase, a curved - and crucial - cocktail bar, there is a gathering of people which includes a pleasingly comic turn by Harry Secombe and Sybil Thorndike who find themselves side by side, each urging the other to accept the free champagne offered to one and all by the Captain - a great turn by Stanley Baker who tries to calm the situation while some passengers form a cabal to taken matters into their own hands. (Curiously enough, there is reference to an earlier flight with trouble caused by two Zulus, an unwitting anticipation of Baker's film Zulu five years later.) One might even detect a touch of Coward as a couple, destined for the divorce court in America, bet upon their sharing of assets while playing cards.

“If you're making a peace overture, dear, I wish you'd do it more subtly.”

“That's the thing about a divorce case, it's the only time if they find you guilty, they set you free.”

Meanwhile one woman snarls at another, “yes, just keep on being wise - it will get you a good pew in Heaven!”

And another troubled couple exchange sharp words: “I'm not an angel yet.” “There can be no doubt about that.”

Curiously, one passenger goes by the Wodehouse name of Mr. Mulliner. Was this an in-joke by its writer and director Cy Endfield? Who knows? There is so much in this film to savour, and one has not even mentioned the budding romance between the co-pilot and a stewardess on her first voyage as turbulence lands a kiss in the vicinity of a breast.

Oh, and there is an early appearance by Paul Eddington. And a touching one by David Kossoff. And one would like to hear the memories of Jeremy Judge, who was nine while asleep during these ninety minutes above an Atlantic which lose nothing for remaining in Shepperton.