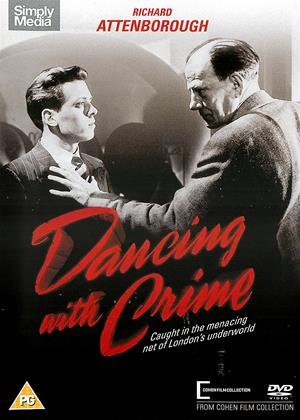 Reviews (2) of Dancing with Crime

Too Many Improbables. - Dancing with Crime review by NC

A taxi-driver and his girl ignore police advice and decide to investigate a black-market ring that has killed their friend. A routine crime story, professionally done, but with a preposterous ending which relegates it from a 'quite good' to a 'if you've got nothing better to do'.

The cast are good, the dialogue is a fraction above average, and there is a noir-ish atmosphere, with (studio-bound) small, crowded, night-time streets; pub and police-station interiors; and guns drawn at every opportunity.

Much of the action takes place in a night-club, and perhaps the main interest of the film lies in catching a glimpse of such a venue, post-war (1947), complete with orchestra, M.C., and dance hostesses.

Such was late-Forties Soho when greengrocers favoured as elaborate a sign as that. It is glimpsed towards the end of Dancing with Crime (1947). Set by night throughout, here is opportunity for many a neon-light commentary upon events as they unfurl

in spiv-laden territory. One can never forget the moment, when, chased by bullets, the associate of a Mr. Big collapses in an alley at the end of which, across the road, flashes the title of a musical: SPREAD A LITTLE HAPPINESS.

Directed by John Paddy Carstairs from a Brock Williams screenplay, the story is a broad-brush one but sports many such details. Former soldier Richard Attenborough is now a taxi driver and engaged to Shelia Sim (off screen, they had recently married) who hankers for a stage career but, like so many, has to settle for what she can get in these austerity years. As chance has it, such is the taxi life, he encounters an Army friend who seems to be living well on nothing a year (as that memorable Thackeray chapter title once had it). Of course the Army man is mixed up with the black market whose front, naturally, is a night club with rather a good jazz orchestra

whose work is the background to many “ladies, excuse me” dance.

These ladies know what is good, if potentially dangerous, for them. As one of them remarks, “Men! They all want to take you to Brighton. What's so special about Brighton?” Unlike his subsequent appearance in Brighton Rock, Attenborough is here on the right side of the Law, if maverick in the way that he and Shelia Sim set about enacting revenge upon a Mr. Big given to such lines as “don't get too close – I'm fastidious.” What's more, he tells those he does not trust that they deserve a rest on his farm; needless to say, they meet a sorry end before reaching any such pastoral tranquility.

Here, again, we see how much a film gains by ensemble playing. Nobody is expected to “carry” it. A bartender can be as crucial in a few seconds as anybody else. And space must be found to mention Judy Kelly, who plays a nightclub singer on the slide (the lyrics were written by somebody with the unlikely-but-true surname of Purcell). A shame that she made only one more film after this.

With so much in these eighty minutes, one has to watch it again before long – and keep an eye out for more of those signs.