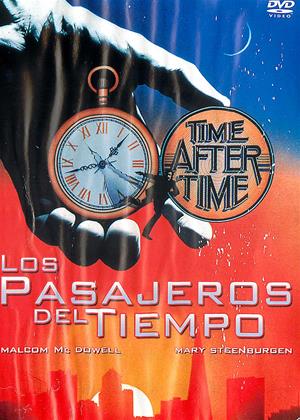 Reviews (1) of Time After Time

The high-concept premise of this film sounds irresistible - H.G. Wells uses his time machine to pursue Jack the Ripper from Victorian London to 1970s San Francisco - but it turns out to be less fun than you might imagine.

It starts promisingly enough, with a satisfyingly unconvincing evocation of the streets of Victorian London, during a prologue in which the Ripper is unmasked before making his escape via Wells' homemade time machine. Luckily, as he does not have the "non-return key" (yes, really), the machine automatically returns to its starting point and Wells considers himself duty bound to pursue the escaped murderer.

Sadly this early promise is not sustained for long. Once the characters have arrived in the contemporary setting, the filmmakers seem unsure what kind of tone to adopt and how seriously they intend the material to be taken. There are a few half-hearted bits of fish-out-of-water comedy, one or two desultory attempts at social commentary, and also what seems to be a genuine attempt to make a tense, exciting thriller. Overall, it isn't directed with the zest and energy required for such a self-evidently bonkers plot.

This lethargy is largely reflected in the acting as well. David Warner and Malcolm McDowell are both good actors, but they seem oddly subdued here. Warner's Ripper is tame and bloodless so there is no real sense of menace, whilst McDowell's Wells is a dull hero. Mary Steenburgen is better as Wells' love interest, but unfortunately her character, initially quite interesting, gradually diminishes to that of damsel in distress.

The final nail in the coffin - the curse of most, if not all, time travel narratives - is that it keeps tripping up on its own logic. To accept the sense of jeopardy that the narrative attempts to create, you have to ignore the fact that Wells could just use his machine to go back in time over and over again, in the manner of Groundhog Day or Source Code, until he achieved the required outcome.