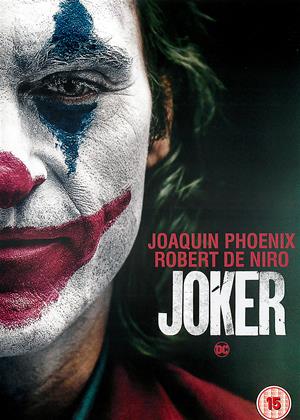 Outstanding - Joker review by BE

A thoroughly absorbing cinema experience with Joaquin Phoenix giving yet another Oscar worthy performance. Emotional, controversial and tragic in equal measure interspersed with some uncomfortable comedy scenes.  I cannot rate this movie highly enough and glory be, no sex scenes!  A Superb presentation.  (I noticed Bradley Cooper coming up in the  in the credits as one of the co-producers - he doesn't appear to be putting a foot wrong these days).

Not really the Joker - Joker review by RC

I wonder why the writers chose the DC comics character of The Joker for this film. They have not been faithful to the character from the DC comics. First of all, deviating from the reason why he's called the Joker, which is not because he was a failing comedian/clown but because he looked like a Joker from a pack of playing cards after falling into a vat of chemicals. Secondly, and more importantly, the Joker in this film is not depicted as being particularly intelligent, at least I didn't get that impression. The Joker from the original DC comics is an expert in chemical engineering and a formidable adversary to Batman. Anyone like this is hardly going to be living on the breadline as a struggling comedian or clown. If they are going to use The Joker from the Batman universe then I really think they should be faithful to the character's roots as otherwise they may just as well have created their own unique character. Maybe the filmmakers just wanted to create a bleak story about an insane character that is struggling in life and turns to murdering people. This certainly reminds of recent cases of people mass murdering in schools etc. Perhaps the writers needed The Joker label as a selling point?

I think Joaquin's performance is clever but this is a very bleak story and not sure what message if any, it has to tell. We know there are insane people about, we know that many are on the edge of committing crimes and that it just takes a nudge to send them over the edge. Do we really need to see what they do? Do we need to see the gore? That I suppose is a matter of personal preference.

This story is reminiscent of others such as 'Falling Down' with Michael Douglas, a man pushed over the edge. Another bleak film, but at least this character is not borrowed from DC comics, and realistically is caught in the end. The Joker on the otherhand vades capture time after time though fortuitous events rather than through design. Compare that to the original Joker that is not only able to escape from the Police but also Batman! You would need more than luck for this.

To me, this is not a character from the Batman universe. I think it would have been better had the writers created a different character of their own and then let Joaquin's acting let loose with this individual.

Controversial, entertaining and also a social commentary on society's treatment of the marginalised, you don't need to be a fan of DC comics to enjoy this superb film. It works as a stand alone, best actor Oscar winning, work of great entertainment.

Over rated - Joker review by JD

Don’t bother - an over rated movie, full of gratuitous violence and the acting did not deserve the Best Actor Oscar.

Typical American approach, all style over substance , save your time and money, do not waste either on this rather seedy  film .

Worth the wait to rent the movie - Joker review by AL

Such a Diffrent story my wife wasnt expecting this type of film as we wanted to rent the movie as we didnt get a chance to watch it in the local cinema Worth the wait to see it in the end Phoenix did a great proformance Outstanding I Would have to rate it a four star.

When this movie first came on the cinemas, a lot was made about the violence in the film, but really not as violent as a lot of films these days, no real story to the film, so rather disappointed.

Phoenix has the disturbing character pretty much taped. Is as thin as Bale in the Machinist. Both films work the disturbed mind to great effect.

Not sure why it had to be Gotham and Joker etc? Nothing to do with the comic character at all really. Like Keaton's great performance as Birdman, could have just been what it was, in New York etc.

Not sure if great acting is just being a freaked out guy or not. Was certainly quite dark and deep......wait to see what Phoenix does next is the answer to that one.

Is this the best film of the year? Oscar winner?

De Niro was really not registered as part of it. In this film it could have been anyone really.

Joker is the type of comic book movie I so desperately want to champion. Here is a film without any vanilla special effects, typical hero journey, typical villain scheme, quippy script or simplistic themes. It’s a bleakly grim picture that frames its central character as a villain born from a swirling of societal ills. But, much like the film adaptation of Watchmen, Joker merely touches on these topics and never gives them enough nuance to say more than a shrug for the messed up state of the world.

There’s little doubt that the highlight of this picture is without question is Joaquin Phoenix’s performance. He plays Arthur, the unfortunate man who will become the Joker. Acting like a clown for local businesses and children’s hospitals, he becomes the target of beatings while on the job. Off the clock, he still becomes a target as he has a mental condition that keeps him laughing during inappropriate moments, making it hard for him to have conversations in public. He spends his evenings at home with his sick mother and watching his favorite talk show hosted by his idol Murray Franklin (Robert De Niro). Maybe one day Arthur could be on that show as the stand-up comedian he aspires to be. Maybe Murray will even think of him as a son and take him under his wing. Anything is possible in his imagination.

In the real world of Gotham, however, things only go from bad to worse. Medical funding will run out, forcing Arthur to lose his mental health case worker and be unable to obtain medication. A mishap on assignment will land Arthur without a job. His aged mother will reveal a depressingly dark secret buried in heartbreaking twists. During his descent, the rest of the world doesn’t seem to care about his downfall. So why should he care about anyone else? Why should he care if he kills a few wealthy jerks on the subway? After all, the poverty public seems to appreciate his murders. Maybe he should keep it up.

I’m aware that for many the mere presentation of a darker Joker with fine performances and unceasing darkness will be a brilliant sell. Sure, on a surface level, the style is remarkable for this picture. But peering deeper into its construction and the distancing it places between the character’s struggle and the societal woes of his world is so bitter that it can’t be ignored. There are real problems within Gotham City that are reflective of our own but none of them build up to anything. This isn’t just in the manner of how Joker literally states he believes in nothing but how Joker himself is built up. We don’t see a progression of his lack of meds destroying his mind, at least not within the chaotic ending. We don’t see a questioning of the class structure past the visceral reaction of the protesters. And the fact that by the end of the film Arthur cares little for their movement as much the politicians forcing violence upon them just creates a toxic taste in the mouth. But, here, wash it out by watching the Joker dance to 1980s rock! Isn’t he something, folks?

All of the praise I’ve heard for the film ultimately comes down to the divergence towards a more gritty character study and that it touches on tougher topics. Indeed, the film does touch on class structure and societal lack of empathy. But how much can really be said by only touching these topics and never digging into them all that much? There’s an unhealthy view Arthur takes in this picture, born from forces far outside his control that turns him into a nihilistic villain and cracks the commentary of this being a cautionary tale. It’s this trap of the film that locks us so deep within the mental landscape of Joker’s narcissism that dare not question the capitalist system and corrupt politicians ultimately to blame for the build-up. I missed there not being a Batman in this film not merely as someone to fight Joker but someone to oppose his empty ideals of the world that has wronged the flawed. It’s this sort of emptiness within the film’s artistic flair that leads to terrible takes of the villain being right. The Joker is not right and neither is his movie that would rather watch Gotham burn than question any of its deep societal flaws which are never called too far into question. Wouldn’t want the rich to get less rich, otherwise, there’s no Batman with fancy tech to fight more tragic villains.