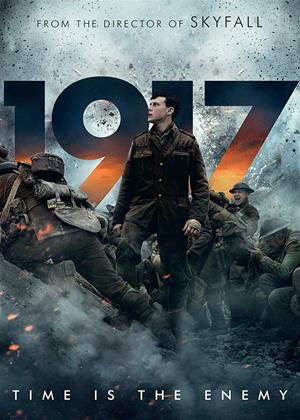 Deakins and Mendes combine talents to create what is undeniably one of the most technically impressive films of recent years. However, sometimes it feels like the story is complementing the camera work, and not the other way around.

1917 may as well have been called The One-Shot War for its stylish gimmick that has paraded in the media. The film can almost be a game of trying to determine where the cuts were made in its presentation of one continuous shot and just how the camera got to such a perspective. While this focus on the technical certainly makes one more aware of the craft, it also makes one more appreciative of the experience. Sam Mendes certainly delivers an unforgettable World War 1 pictures in this aspect.

The film concerns two British soldiers on the frontlines that are given one of the most dangerous of missions. The army has learned of a German surprise attack that could decimate the British forces on another side of the battlefront. The two men are tasked with traversing the dangerous German territories by hopping out of the trenches and straight into hell to deliver the crucial message. One of them has a brother serving on that side so there’s reason enough to hurry, if not for the hail of gunfire and explosions they’ll face along the way.

The two soldiers fulfill a sufficient role by adhering to some somewhat expected melodramatics of staging a war drama; there’s some tension, some dry humor, some contemplation of home, some tragedy, and some near misses. But let’s be honest; this is all more in service of the vibrant visuals more than anything. The argument of the film being little more than a pretty piece of fantastic filmmaking is not really a negative here. This is a film that knows where its strengths lie and it’s clearly not in the most original depictions of soldiers and superiors, despite some strong cameos from the likes of Colin Firth, Mark Strong, and Benedict Cumberbatch along the way.

Every scene is perfectly staged. Though there is no exciting action for the first twenty minutes, it builds so well with a brooding in the soundtrack and a fear in the characters. We’re let in on how dangerous the journey will be and the first few steps out into the open are treated with the terror they deserve. Some jumps and surprises occur when the two discover hidden bombs, are fired upon by soldiers and flee from the wreckage of a dogfight. And though there’s a ticking-clock sensation throughout, there are still a few moments that feature a somber break from the action to catch your breath.

Cinematographer Roger Deakins has truly outdone himself with this picture. The camera whips around so many different angles and shots as it constantly follows the central soldiers. It goes high, low, into buildings, into tunnels, into trucks, into crowds, behind soldiers, underwater, off cliffs, over the hills, etc. There’s a constant battle with the eyes and the mind of trying to pay attention to find all the seams and then getting lost within the story that you almost forget about it.

For example, one scene features a soldier hop into a truck with other soldiers, sitting around and thinking about the mission while some joke about their superiors. An interesting scene that takes a break from the action but, wait a minute, how did the camera just effortlessly shift directly behind a soldier with his back to the wall of the truck? How did it get there? These are the unique questions I love thinking about while watching a technical marvel, amazing enough that I almost don’t want the answer how it was done if only to believe a little more in movie magic.

1917 is just damn good filmmaking and one of the strongest presentations of a war film I’ve seen since Dunkirk, bursting with an astounding sense of color and thrill. Last year, I watched Peter Jackson dress up World War 1 archive footage in his documentary They Shall Not Grow Old. If that film was vividly informative for the engaging presentation, Mendes gives an added dose of spectacle to that same sense of capturing history. Try to double-feature both if you can.