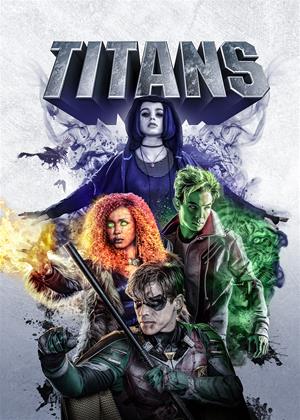 The Teen Titans have gone through a rather bizarre metamorphosis over the course of decades when it comes to their media adaptations. Casting aside the forgotten Filmation shorts, Teen Titans found a young audience in the early 2000s with an anime-inspired action cartoon series that was revered enough to last for five seasons. This was later followed up with Teen Titans Go, a more satirical take on the previous series and DC Comics in general, a shift so hard that it angered many fans who had come to expect a bit more grit from the ensemble. And now we come to Titans, the grittier, darker, and more profane take on the hero ensemble in live-action, striving to be sold bold that the leader of Robin at one point remakes “F**k Batman” as though it were trying to stress how this isn’t your daddy’s Teen Titans.

The Titans are still the young and angsty hero group led by their leader Dick Grayson, former Robin to Batman, but with a grittier tone. They no longer just save the day from classic DC villains but track down murders, tackling law enforcement, besting nuclear foes, and having sex somewhere in between the blood gushing and bones crunching. They’ll occasionally cross paths with the likes of other ensembles such as Doom Patrol as well as Batman, despite Dick’s former comments about the caped crusader not being as relevant.

Titans feels very much the way the show would be approached as though it were on HBO, trying to amp up the adult nature while not straying too far from the comic book origins. It’s for this reason why the show endures with such quirky characters as Starfire and Beast Boy, reducing them to tougher vigilantes rather than their more relatable teen nature. This is what made the original animated series of the early 2000s work so well, balancing the goofiness with genuine issues and dangers. This iteration on DC Universe swings that pendulum so far into the darkness you can hear the sploosh as it crashes into an inkwell of edginess. Few moments in this series make the characters feel real, favoring to keep up stiff lips and clenched fists as frequently as possible before anyone cracks a smile for staring at Nightwing’s costume for too long.

And yet the series can’t help itself by resorting to the same sort of superhero theatrics akin to the sunnier series of Supergirl and The Flash, both of which do a fine job of finding a tonal balance to make us care about the heroes and their struggle. In those series, one can be a bit forgiving when an action sequence brimming with melodrama clunks along to give more of an arc and perhaps some pathos. When Titans attempts this, as with the weirdly assembled carnival sequence that results in one of the Titans biting the dust (a bit of a hallmark from the comics), it’s garish.

Further throwing off the vibe of the program is how it aims to throw just about everything into the pot. If there’s one positive trait that can be spoken of about Smallville and Gotham, it’s that it slowly eased us into the supernatural before shirking its more grounded setting. Titans jumps face-first into its own cracked pavement of a premise, letting the likes of Batman, Superboy, and even Krypto crowd the screen early. The likes of Doom Patrol and Cadmus also get wrapped up in the various seasons, as does the demonic force of Trigon, Raven’s father. There’s just so much pushed into this show with so little of it connecting firmly to the more serious format it desires so much.

I understand that my comparison of Titans to previous DC live-action programming may not sound as fair and may even be indicative of the strive for the Titans to be as gritty as they are. But in trying to push for a show that is bolder and more adult than its counterparts, there’s an uneasy sensation of the series trying too hard to redefine the image of the Teen Titans rather than build them up as some hardcore vigilantes. If one wanted an earnest perspective on a team, you need only look to Young Justice, a series that managed to take itself seriously with ample dark content and less punctuation.