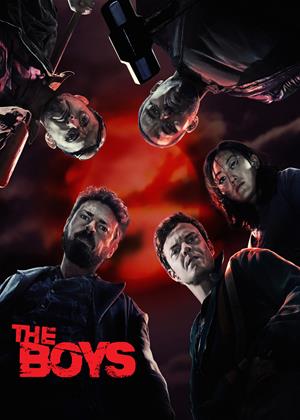 Reviews of The Boys

The Boys exists in a remarkable spot among postmodern comic books. The original series conceived by Garth Ennis thankfully poses more thoughtful questioning than just “What if Superman was bad?” or “What if heroes became criminals?” Indeed, the heroes are shown not to have the best interests at heart as their powers are called into question. As with most of Ennis’s work, however, the clashing of questionable heroes is met mostly with anti-heroes, making the thematic core a bit foggy at times. Thankfully, as the show goes on, it manages to become a little bit more than a shocking show of every episode grittily grunting that this ain’t your daddy’s comic books.

The show takes place in a world where superheroes have become more of a brand than a band of do-gooders who save the world. The public recognizes the superhero ensemble group of The Seven more for their appearances in movies and at public events than for their general heroism. Under the control of the Vaught corporation, their image is so well maintained that few witness their darker side. The latest victim of their reckless nature is mild-mannered retail employee Hughie. He was looking forward to a future with his girlfriend until the speedster hero of A-Train accidentally rushes through her, bursting into a slush of gore.

Vaught, unwilling to admit that they have flawed heroes, forces Hughie to sign a contract for a small amount of money to look the other way on her death. Hughie, unwilling to accept this non-apology, tries to take the offensive. His quest for revenge sends him into the den of the outlaw Billy Butcher, committed to secretly taking down The Seven. Having helped Billy incapacitate and capture one of the heroes, he’s already in too deep to leave and figures this is the only way to find peace.

Because the superheroes certainly have a lot to answer for. The latest addition to the team is Annie January, better known as Starlight for her ability to conjure blinding energy. She witnesses just how corrupt and scummy The Seven can be when the cameras are off. Her aquatic idol of The Deep turns out to be a real pervert that wastes no time exposing himself to her, shattering her vision of what this organization is really like. What she won’t see as present is the nationalistic nature of Homelander, one of the most powerful heroes of the group. His brash nature and disregard for human life is deeply concerning, especially for his ex, Queen Maeve.

Homelander's gross disregard for questioning his actions is best showcased in a sequence where he and Maeve are called upon to stop an airplane hijacked by terrorists. After basking in the applause after foiling the first batch of terrorists, he stupidly uses his laser vision in the cockpit on the remaining terrorists. With the controls dead, Homelander merely shrugs and states there’s no way to save the passengers, lying to all of them as he makes his escape. However, Homelander only commits such atrocities when he’s sure he can get away with it. During a protest, he fantasizes about vaporizing the entire crowd of those who speak out against the Seven but doesn’t do so. He has an image to maintain and power issues that make him a dangerous narcissist. There’s no better scene that sums up his character than at the end of season two, where he pathetically masturbates off a rooftop while grumbling about how he can do anything he wants.

Season one proceeds with a lot of on-the-nose commentaries that is decent but somewhat expected. For instance, it’s no surprise that at a Christian rally, the likes of Homelander use the platform as a chance to be deeply political and Starlight finds herself grossed out by lying to young people about abstinence. Billy Butcher ventures onto the scene and will, of course, give his savage atheist take to unwitting puritans. Hughies descent into murdering The Seven also comes about far easier than it seems like it should.

It’s only during season two where the focus becomes a little more clear and the thematic elements more interesting. Billy gets a deeper backstory, Hughie’s relationship with Starlight is better fleshed out for all its complications, and Homelander finally starts realizing how little control he has over his life when it’s dictated by others. Homelander’s arc becomes the most interesting when he tries to connect with his genetic son in a way that makes him come off as the creepy and abusive husband. Pushing him further to the edge is Stormfront, a superhero name that is far too fitting. She starts off as a quirky team player with electricity powers but soon reveals to Homelander that she’s a full-blown Nazi with eugenics on her mind. Her deeply horrifying history not only reveals more of Homelander’s cowardice but also provides a grim outlook if The Seven is not challenged.

The Boys went from a meandering and questionable first season to a firmly focused and viciously satirical second season. It has the potential to not only slather the superhero wave with the grimy coat of satire it deserves but develop its characters beyond the simple mindsets of the social references. There are a handful of bits that are kinda-sorta explored throughout the series, as with a religious cult that props itself up on notoriety and the hollow nature of film production but all of it builds beautifully in a way that takes chances and sets up plenty more for the long haul.