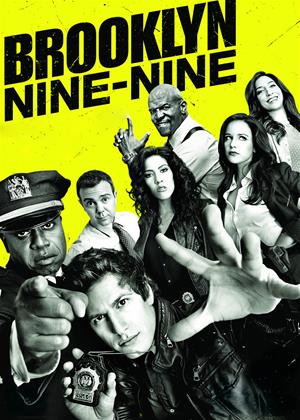 The presence of Brooklyn Nine-Nine seems almost like a necessary evolution of the influx of procedural police television. An endless deluge of exposition-driven cop dramas is about as aggressively shoved onto US network airwaves as detective programs crowd English television. A parody was all but assured. While there were a few mocking portrayals on the likes of Adult Swim, they were buried within a landscape that mocked from afar on cable and didn’t have the legs to extend the joke longer. Brooklyn Nine-Nine has such chemistry and comedy to keep itself going just as long as the CSIs and NCISs. Maybe not for spin-offs but somehow I think we’ll live.

The show follows the office and street exploits of star Detective Jake Peralta (Andy Samberg) of the 99th Precinct of the New York City Police Department in Brooklyn. His boss, Captain Raymond Holt (Andre Braugher), is the familiar and classic captain who takes no humor in his job and is one botched job away from having someone’s badge and gun. He’s a great counter to the more carefree atmosphere at the office, where fighting crime seems to take an easy-going approach. And as someone who has watched too many procedurals of the dreary by-the-numbers direction of cops, it’s refreshing to see a show not take this premise so overly stern to the point of being bland.

And there’s a lot of fun to be had in this work environment. Amy Santiago (Melissa Fumero) is the nerdy girl of the office that Jake can’t help but adore for being so serious and as successful as he is at his job. Rosa Diaz (Stephanie Beatriz) takes her job too seriously that he becomes a brilliant satire of the apathetic cop gets too violent and can’t read the room. She pairs nicely with the hard-working and unsure Charles Boyle (Joe Lo Truglio). And then, of course, there’s Terry Jeffords, played by the highly vocal and muscular Terry Crews who one can’t help but adore in his high level of exuberance.

Brooklyn Nine-Nine has a lovable charm for presenting dorky characters that clash within a law enforcement setting. It has this cute silliness to the way that Jake can still get the job done, but always finds a way to take advantage of an opportunity for a comedic jab or a geeky citation. There’s a brilliant balance to the cop job and comedy. Take for example a scene where Jake waits for word of going undercover; the scene begins with him quoting An American Tale: Fievel Goes West hilariously switches gears to him getting the call, and then transitions into him donning a ridiculously oversized suit for the occasion.

It’s especially astounding to see how much of the comedy derives from the writing itself, where an entire episode could just be in the office and still find ways to be endlessly entertaining. One of my favorite bits involves Jake and Charles coming up with goofy codenames, arguing they can’t use characters from Cats as their call signs. Whereas other police procedurals will put on their blinders for solving crime, Brooklyn Nine-Nine takes the time out of work to stop and smell the roses. And what a lovely bouquet this series whips every season as a comforting piece of fun built for the long haul of solid laughs.