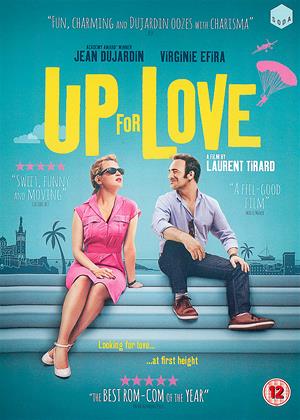 Reviews of Up for Love

Up for Love features a silly premise that somehow, someway works for a full-fledged French rom-com. Jean Dujardin as Alexandre and Virginie Efira portraying Diane come together to pull off the best prank of the century, which is kind of what the movie is all about. In it, the 182 cm tall Dujardin, by use of CGI and/or practical field-of-view tricks a la LOTR, appears way, WAY shorter than his romantic love interest Diane (175 cm in real life). And, as these things usually go – that doesn’t stop the two leads from madly falling in love – despite their (obviously huge) physical differences.

The plot follows Alexandre, who is the best at what he does – being an architect and all, while his strong point is his ability to talk his way out of even the hardest of predicaments. So, as the rom-com story goes, despite being a, and I will say it: midget – Alexandre is charming, smooth and knows his way with the ladies – probably a God’s way of compensating that which is forcefully taken away by nature. Then, Alexandre goes on to meet Diane, who in turn is flabbergasted by his appearance and some awkward moments soon ensue. After the antics of short-tall differences get sorted, the duo hit it off in what would become the couple of the century – topped only by the recent likes of the Kardashian marriage.

Meanwhile, people of all age and status throw diminutive looks upon Alexandre, who stoically and in good humor endures each and every projectile he is hit with.

In regards to maintaining tension, Alexandre is written to sport his decent amount of flaws, which are nonetheless always circling back to his overall physical appearance and stature. The carnival of ‘small meets big’ or vice versa plays off to boredom, as we witness Alexandre’s inability to sit normally on a human-sized chair, or finding his voice among a group of normal-sized people.

And that is about it really.

The rest comes up to the cinematography – decent; direction by Laurent Tirard – typical for the French new wave cinema (is there really such a thing?); music and sound mixing – forgettable and decent respectively; overall tone and atmosphere – satisfactory; story – as mentioned.

Sometimes, Up for Love gets engulfed in questionable CGI effects and clumsy implementation. While this is true for several upcoming instances – it’s mostly OK-ish. CGI for the win.

Bottom line, Up for Love is more of a sit-com, rather than a comedy of dialogue and wit. For such, it plays out identically as other predecessors sporting the same structure and form. If you’re on the demanding side of things – then Up for Love will probably not quench your thirst for entertainment.

On the other hand, if you’re looking to be spoiled by a succession of improbable events that amount to perfect love - Up for Love is a viewing gig not to be missed.