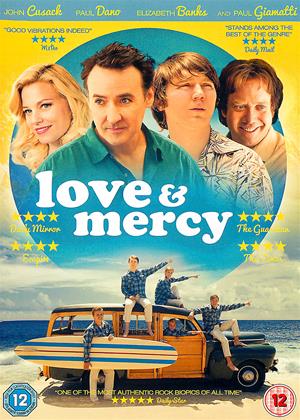 Reviews (8) of Love and Mercy

It's hard to give this film an accurate star rating because it's really two interwoven one-hour films about events that happen 30 years apart. If the sixties half of it had been expanded into an entire movie, with the later part reduced to an epilogue or a framing story, it would deserve 5 stars. Paul Dano is superb as the young and very troubled Brian Wilson, achieving both commercial and artistic success because he's an enormously talented musician, while simultaneously falling apart due to a combination of having an absolutely dreadful control-freak father who wants to be a pop star by proxy through his sons (that sort of domestic arrangement seldom works out too well in the long run - exactly the same thing happened to Michael Jackson), and taking LSD when he already has schizophrenic tendencies, which is never, ever a good idea! (See "The Devil & Daniel Johnston" for further details.)

The lengthy scenes of some of the Beach Boys' best songs being put together in the studio by an incredibly committed, sometimes manic Brian Wilson are riveting, and truly succeed in conveying how talented you have to be to produce a genuinely brilliant piece of music of that complexity, even if it's only a 3-minute pop-song. And of course, the fact that the end results are represented by the actual music of the Beach Boys at the peak of their powers doesn't exactly hurt. Paul Dano is very convincing indeed as a nice young man who just wants to make music but is rapidly descending into madness that terrifies him and he can't make it stop. And it really does look like the early sixties, partly because the director went to the trouble of sometimes using obsolete film-stock so that it resembles the slightly grainy movies we're used to seeing from that era instead of a crystal-clear modern one.

The nineties scenes aren't so great. John Cusack is a bit of a cliché as the pitiful, twitching man-child Brian Wilson has become, and not terribly interesting. As for Elizabeth Banks as the unbelievably nice car salesperson who saves him from the frightful Dr. Landy, she's just plain dull. And there's far more simplification and whitewashing going on in this part of the film than the sixties portion, which is by all accounts painfully accurate. In particular, the fact that Brian Wilson's next of kin made an extremely dodgy psychiatrist his legal guardian and let this quack control every aspect of his life is never addressed. The truth is that the combined effects of alcoholism, cocaine addiction, massive abuse of various other substances, severe mental illness, and weighing 300 pounds were so obviously going to kill him in the very near future that they had no choice but to turn him over to the one guy who could control him well enough to save his life, and unfortunately that short-term fix eventually went horribly wrong. But here we see a pathetic innocent saved by a knight in shining armour (female for a change) from a parasitic monster who is 100% to blame for everything, because that's neater and cleaner than the real story. And what's with that huge visual reference to "2001 - A Space Odyssey"???

So it's a film of two halves, one of which is far better than the other. But that half is so good that it's well worth seeing the film. As for the lesser half, the constant switching between sixties and nineties means that it keeps returning to the part you're really interesting in before you have time to get bored. All the same, I wish it had been a whole movie about Brian Wilson's descent into madness, and the menagerie of crazies he hung out with more and more as he drifted away from the other Beach Boys. To mention just one name: Charles Manson...

So, this is yet another film about a tortured musical genius! That needn't be a problem if it's done well - think "Amy" - but everything about the way this was done just left me cold.

First, the structure, with its split between the 60s and 80s, was really laboured; just as you were getting going in one era, it switched to the other era, and it wasn't as if there was any connection between the two - it seemed totally random.

Second, the 80s part was pretty weak. Cusack was not at all convincing, the whole bit with his shrink was way OTT, and I never felt I was gaining an understanding of Brian Wilson; it was just scene after scene where you felt sorry for him, but nothing more.

Third, the 60s section just didn't do full justice to Brian Wilson's genius. It focused a lot on the later Beach Boys stuff, and the creative angst of an individual who wanted to go beyond what his fellow band members were capable of, which was okay up to a point, but what about all the great stuff they did before that? Instead of celebrating his genius, it made him look simply weird, nutty, whatever, a sort of latter day Mozart.

Overall, I was left feeling "robbed", meaning that I felt the film failed to give me any real insights, failed to give a balanced portrayal, and failed to entertain me. I know others will completely disagree, which is fine, but my whole point is that this film is like Marmite - some will love it, others hate it. Just be aware of that when you rent it.

A feel-good film - Love and Mercy review by CH

The other reviewers have covered most of it. There are gaps, and the part of Landy is overdone and crude when he did probably save Brian's life. But the film is a delight to watch, if you like music and musicians the studio scenes are excellent, and you have to be very hard-bitten not to enjoy the ending. I watched it 4 times for the pleasure of it.

Love and Mercy is the telling of two time periods in the life of The Beach Boys songwriter Brian Wilson. One period is set in the 60's showing Wilson (played by Paul Dano) about to react the peak of his creative and artistic powers with the recordings of the Pet Sounds and Smile albums but also it shows his personal downward spiral with mental and drug problems and the strain it is putting on his relationship with his follow Beach Boys.

The second period is set in the 80's when Wilson (Played by John Cusack) was under the thumb of Doctor Eugene Landy (Paul Giamatti) a radical therapist who was hired at first to help Brian out of his drug addiction and provide treatment from his mental state, but eventually became a Svengali figure who controlled every aspect of Wilson's life. This is when Brian met Melinda Ledbetter (Elizabeth Banks) and their blossoming relationship is the main arc of the story.

I personally think the 60's is the part the film is far more interested in. It's when the film is most alive, creative and psychological. The 80's part seems a like a sub-par TV movie. Paul Dano's Wilson is the superior performance. Cusack unfortunately seems to be playing Wilson like every character he has played before. Banks gets nothing really to do apart from love interest and Giamatti is OTT as Landy.

The Wilson/Landy relationship is just waiting to be made into a film, it's that messed up.

Almost a documentary. - Love and Mercy review by DM

I thought that both actors were believable in the part, having seen lots of clips of Brian Wilson in the past and as he is now. The music was also handled really well.

It did me. Yes some of the acting is a bit hammy (though the young Brian is magnificent) but the recreation of the early-period recordings and falling out is magnificent, as is the music (natch). While I enjoyed it a lot, I felt that it was too one paced and, in places one dimensional, to really grab the interest of someone who didn't come to the film already wanting to watch it. I did. If you don't, then beware.

This is a fascinating movie - about songwriting, the toll artistic creation can take, and somewhat surprisingly, the huge power shrinks can have over their patients.

Not sure how much is true - and how much invented through dramatic licence.

However, what is true is that the Beach Boys made some great records + all their great songs were written by Brian Wilson, who then suffered a mental collapse thru drug abuse, stayed in bed for 3 years then disappeared. Only to recently complete the SMiLE album started in 1968 (?) and start touring again (watch till the VERY end to watch Brian singing the track LOVE AND MERCY).

I had no idea about the rest of the story so enjoyed seeing that (and I have always been deeply suspicious of shrinks and their motives, so this was preaching to the converted really).

As a songwriter and writer, I also identified with the sometimes tortuous process of songwriting.

Though a bit 'poor me' pity party, misery memoir at times (to fit in with modern American mores and the habit of blaming 'abuse' by parents for everything that goes wrong in one's life, rather than, say, DRUG ABUSE), this is a really watchable film. One wonders if daddy was quite so bad though - he was just a typical post-war dad, non?

This film flits back and forth between the 60s and the 80s. With Brian Wilson played by 2 different actors - something that works surprisingly well.

I simply adored all the songs here - such great harmonics and key/chord changes. For that alone I loved this film. Though the changes can be confusing to the unwary.

Bit of a slick film about an important influence on pop music. As ever, Paul Dano is great, the best person to have been chosen to play this role. Who on earth decided to cast John Cusack as the older version and then split up scenes and chronology of events? is beyond me. It doesn't work. Why couldn't Dano have played the older Brian?

Disappointed by this film, which had some potentially great elements; Brian Wilson's life story, the music and a good lead role (Dano) and then couldn't really pull it off.