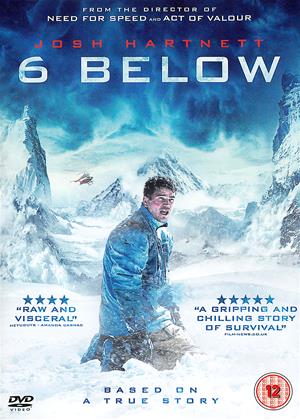 A botched job - 6 Below review by TE

The sort of escapist hokum that will find its place on daytime tv eventually.

The action is constantly derailed by dull flashbacks. Why not just tell the story in chronological order? It's based on true events so the chronology is not difficult.

6 Below (aka 6 Below: Miracle on the Mountain) review by Mark McPherson - Cinema Paradiso

Despite being based on the true story of Eric LeMarque, 6 Below does very little in its showcase of a survival drama about one man lost in the cold who managed to find his way back to civilization. Not only does its cinematography and portrayal of desperation so ho-hum it’s forgettable but it’s a title that is doomed to be mistaken among other films of a similar nature. How easily will this be confused when positioned next to the similar premise of 8 Below? Even the addition of Miracle on the Mountain makes it still sound bland.

Based on LeMarque’s memoir Crystal Clear, Josh Harnett plays the true-life figure who found himself stranded in the snow in 2004. The former hockey player finds himself engulfed in a dangerous storm atop the Sierra Nevada Mountains. As the snow gets worse, so does his frostbite. Lost in the loneliness of nature’s most powerful cold, he must not only find a way out of the raging white but also battle his personal demons as well.

There’s not much else to this survival story that was most likely picked up by a producer who made the quick remark of “say, that could be a movie,” neglecting any way to differentiate from the myriad of other winter survival movies out there. Harnett’s performance is sufficient and he does at least exude the sensation of a man losing his mind as much as he is feeling in his fingers. The snow effects within Utah are quite believable as well. But other than that, what else was there?

Well, I guess it was pretty cool when Eric found himself so desperate for survival that when he encountered wolves his quest to live turns violent. The film was pretty good right there. Wait, no, hold on, that was The Grey.

Well, um, oh, I really dug the quiet contemplation of the character for the first half of the film that brings out a slow and somber sense of despair. When he eventually protects another survival and makes tough calls with his resources, the tension is not too shabby in...no, I’m sorry, that was the film Alpha.

At least the film will be memorable for the scene where Eric loses his mind and has a song stuck in his head that haunts him for days. It’s excruciating for its repetition and truly communicates one losing his mind. Except...no, wait, that was Tripping the Void.

Well….hmm. What was memorable in this film? Seriously, I watched it yesterday and my mind has gone blank. Even looking back over the synopsis gives little info on what makes this story so distinct. I can recall bits and pieces that are staged well but more from a general sense of the production having more quality than the editing and narrative.

Yes, I’m aware it’s based on a true story and by that very declaration, it’s easy to view this with the eyes of admiration, as though we’re really watching Harnett stuck on a mountain. But we’re not. We’re watching a decently made film on a memoir that is most likely more intriguing to read and probably more enjoyable as a short film or true documentary. 6 Below ultimately turns up below the competition in terms of its memorability.