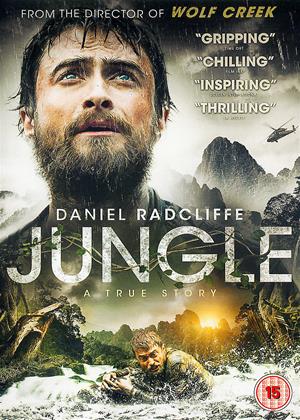 All the usual components of a true survival tale are present here, but the film feels disjointed and leaden-footed.

There are loose ends left at the conclusion, and much of the early set-up is rushed, leaving the characters acting like cardboard cut-outs.

In particular there is no explanation for the speed at which the "friends" start shouting at each other and falling out.

I thought this film was quite good. It shows how excitement for adventure can lead to trouble and then a human's fight for survival in a very harsh environment. The film kept me interested most of the way through and on edge at certain points. I feel it was more interesting knowing that it was based on a true story as well because you can re-live and imagine what it must have been like for the real people involved. Really good acting also, especially from Radcliffe. I would recommend this film.

I enjoyed this film and realised I was familiar with the true story - I saw a documentary on it a few years ago on TV, though the true life ending in that was not the same as this (both men were found on a river bank in that). An awful tragic story and a cautionary tale for all travellers!

Anyway, this film is a bit long but effective - you genuinely feel for Yossi in the AWFUL Amazonian jungle (I have always hated jungles and never want to visit one). This film oozes sweat!

The images of the wildlife are superb and it was filmed in Colombia and Bolivia, though made by an Australian company.

Daniel Radcliffe and the other male actors impress. The bit that didn't work for me was when a rainforest tribal young woman appeared - and I would have cut that to make the movie shorter as it drags a bit there.

The best South American rainforest movie is probably APOCALYTO by the otherwise odious Mel Gibson. This is well worth a watch though as is Heat and Dust by Evelyn Waugh, and The Lost City of Z which is good too.

Another adventurous choice for the ever-watchable actor that Daniel Radcliffe has become since putting the boy wizard behind him. Dan and his fellow backpackers go walkabout in the Bolivian jungle. Based on a true story, the first half is an old-fashioned adventure story of Man v Jungle and it works admirably on this level. The characters feel real, the locations are gorgeous, director Greg McLean keeps the story moving along with pace and you’re drawn along into the adventure, even with a tinge of envy. Of course, things don’t go well.

The second-half turns into a survivalist tour-de-force that, as they say on TV, ‘some viewers may find distressing’. There are some gross-out scenes, but it would still work if not for the sudden introduction of flashbacks and hallucinations that dissipate the tension. To give you some idea of what’s in store, the rea-life character that Dan plays actually came out of the jungle with 13 worms burrowed in his body.

The DVD has a raft of fascinating extras that show the considerable physical discomfort Dan put himself through during filming. A gripping watch that with more focus could have been a classic.

Overall, I thought this was a fine film - showing Daniel Radcliffe to be emerging now as a skilful and versatile actor. The film developed Daniel's solo efforts to survive the hardships of the jungle with superb realism and the later stages of the film were all the more riveting for that. The fellow travellers that Dan pitched in with were a bit irritating - but maybe that was a deliberate aspect of the casting! All in all, one of the better survival films I've seen.

Not sure about this - Jungle review by HM

A true story with the addition of a Jaguar and a good looking hallucinated girl. My impression about 80% through the movie was that being lost in the jungle is boring frankly. I suppose the real life version was even duller, it is just the fact that you are likely to starve to death; they say you can live in the jungle or travel through it with supplies but not both. My interest in the film waned as it became obvious certain events were inserted to liven it up a bit. Radcliffe is good and nobody can say he doesn't pick scripts that are star vehicles. This film certainly isn't.

Daniel Radcliffe really doesn’t get enough credit for throwing himself headfirst into the oddest of pictures in his post-Harry Potter career. No film finds him sacrificing more than with Jungle, a based-on-a-true-story survival story where he intentionally starved himself to accurately portray a man lost for days without eating. It’s just too bad he’s trapped in a film that doesn’t do him justice, struggling to find stage scene of losing one’s mind when Radcliffe has a method nailed down.

It’s a story based on the true-life 1981 survival tale of Yossi Ghinsberg (Radcliffe). An Isreali adventurer, he sets out on a trip for the Amazon rainforest of Bolivia. He’s enticed by the prospect of meeting an Indian tribe, seeing and learning new things. He’s assured by a guide that everything will be fine. But how many movies that lead to the jungle ever turn out alright? A series of unfortunate events leads to Yossi being separate from his group and lost deep within the rainforest, forcing him to survive on his own for days before he can either find civilization or somebody comes back for him.

And here is where the film falters with trying to stage the drama of losing one’s mind in isolation and starvation. The trickiest part is how to actively portray the visions and fantasies that crop up in the brain. I recall the documentary Touching the Void where a mountain climber tries to describe the experience of losing oxygen and hearing the same song over and over in his head, an event that was subtly staged. No subtlety in Jungle, presenting Yossi’s maddening visions as backstory and comic levity. He remembers the conversations he had with his girlfriend under the stars, fluidly transforming into trippier sights. Not ludicrous enough? How about a wishing vision of a decadent meal with surreal sights and a goofy orchestra accompaniment?

These theatrical aspects feel unneeded or at the very least ill-presented in a story where nature survival should be compelling enough. I enjoyed how the movie tricks the viewer at times with people not really there, food not quite present, and hope always far in the distance for Yossi. Radcliffe doesn’t just work for this role but suffers for it in what may be one of his best roles, which is saying something for an actor willing to play a decaying corpse and horned beast in his previous movies. One could write it off as a gimmick of the movie, but it may very well be that mindset that caused director Greg McLean to add in extra dashes of unnecessary fantasies.

Jungle has a lot to keep the eyes glued. The actors present, from the natives to the English speaking players, all delivery direct and to-the-point acting that never tries too hard to be engaging. The wildlife cinematography is astounding, from the gorgeous trees of day to the muddy nights with rain. McLean gets very up close and personal into this setting so we can feel all the dirt and grit on Radcliffe’s face. But in trying to keep that running time up, he adds some odd theatrical additions that hold the film back. And why would you want to turn the camera away from the finest of performances by Radcliffe?