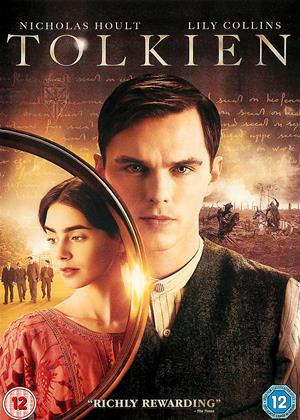 Enjoyable But! - Tolkien review by AA

I was left wondering just how much of the film is based on documented factual evidence or a liberal view of writings etc. Excellent performances from the cast but like another reviewer I was at times wondering if Tolkien had managed to keep his youthful looks like Mr Hoult seemed to have done.

After about 20 minutes in I should have turned it off

But I was outvoted so

It's About Fellowship - Tolkien review by BG

We've had a biopic about A. A. Milne, so it was only a matter of time before we had one on J. R. R. Tolkien, the most successful fantasy writer who has sold millions of books. The film takes us through the author's life after he became an orphan, his gift for inventing languages, bonding with friends at school, his love for Edith Bratt and a brief separation, struggling to get in at Oxford and staying there, and the terrors of trench warfare in World War One. The film ends with Tolkien starting to write The Hobbit, so we don't get to see his latter years and the success of Lord of the Rings. The film may have a conventional approach that most bios contain, but there are some strong moments. The cross cutting between the war and Tolkien's early life was effective, and when he experiences the horror of battle, there are "visions" of dragons and demons. There was never any doubt that the war affected the author so that his epic Lord of the Rings was really about those terrors in fantasy dress. An effective moment sees a huge evil shape towering over the aftermath of battle... surely a metaphor for the Dark Lord himself, Sauron. Also the loss of Tolkien's two members in his personal "fellowship" was quite moving. If you have admired Peter Jackson's films, then you may find this biopic interesting.

Not sure whether to give this 2 or 3. Some bits 2 (miscast 'strong' actresses to play Edwardian women; silly claims Tolkien's childhood bits magically created his stories rather than hard graft, or that he has a genius memory; the absurd claim that he was poor); Some bits 3 ( the 4 teen boys and the childhood bits; the WWI scenes in part).

Way too much flitting around in flashbacks for my liking, and everyone looks too modern - the faces are of our age not Edwardian England, the women too 'girlpower #metoo' - this is often the case in modern pc movies. Derek Jacobi great as usual.

Not sure re Hoult as Tolkein - he looks far too young later on.

I have never been a fan of boring fantasy novels like The Hobbit etc. No mention here either that Tolkien based his made-up Lord of the Rings language on Welsh.

Most interesting bit for me with the club of 4 boys and what happened to them, esp the poet and the last one to die.

I really found this very watchable and a little emotional. I don’t know very much about Tolkein so didn’t have clue how much was artistic licence.

As other have said no idea how accurate this film is regarding his real life but just as a stand alone film it's a beautiful story about love and friendship, I really enjoyed it.

I was expecting a bit more of a controversial look at Tolkien's life after it was dismissed by his family but I really cannot see why they would have issue with it. It is a rather straight-laced look at his life and only really comes to life in the war scenes which show where some of the imagery for his work may have come from. A little bit more of this would have been welcome but the performances are uniformly good.

We thoroughly enjoyed this, our first film rental from Cinema Paradiso. An excellent cast, beautifully filmed, a great musical score and an intelligent and absorbing script. I had no idea that JRR Tolkein had been an orphan, and that was the start of my education during this film. The script skilfully hinted at the sources of inspiration for much of Tolkein's work, and his friendship with 3 other young men from school on explained so well the group of friends from the Shire in The Lord of the Rings. One to watch again.

We are LOTR fans and enjoyed the story... particularly spotting clues that might have influenced his middle-Earth stories along the way, from his inventing languages to the horrors of the WW1 trenches. The parts were all well played, his story was interesting and it was well worth watching :)

I had heard that the family had not cooperated at all with the making of this film, nevertheless I found it very engaging.  I hadn't realised how much hardship Tolkein had endured during his childhood, mitigated in part by fortunate mentorship later on.  As well as fleshing out his innate genius, and what inspired him to write the trilogy the film offered a fascinating glimpse of an era long gone.