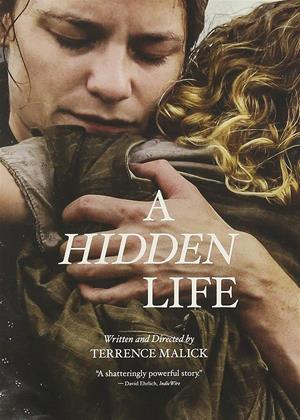 Reviews of A Hidden Life

Terrence Malick has been getting a bit rusty with age, where his meandering malaise seems to carry less impact with each film of deep contemplation. While not fully bored with his previous pictures, they certainly don’t contain the same breath of life he infused within his masterpiece The Thin Red Line. Thankfully, A Hidden Life is very much a return to form with a more grounded narrative that lets that great beauty and sorrow of life wash over the audience.

Set during World War 2, Austrian farmer Franz Jägerstätter is in a quandary. The Nazis have moved in and are urging him to join their forces in the war. It’s his choice: He can either join the Nazis or be executed. Franz does not want to join the ranks and is troubled about how to stand up to the Nazi movement when he is just a farmer of a small rural community. He is pressured by all his sides to fight, including his Catholic faith that stresses he has a duty to his Fatherland. Tough choices have to be made and the ultimate conclusion is deeply heartbreaking.

Malick’s filmmaking style is present once more where quiet whispers of deep thoughts pierce through the gorgeous visuals and the background of World War 2. Cinematographer Jörg Widmer shoots the most immaculate of locations with a wilderness setting that seems so hauntingly beautiful for the downbeat dressing. The outdoor scenes feel grand and intimidating while the close-ups feel uncomfortably intimate and disorienting with the focus. Even the interior shots, such as a scene within a prison, have some interesting techniques. The score by James Newton Howard matches the quality of the visuals with a rich cinematic allure.

Though a period piece, A Hidden Life holds a lot of historical importance today for how one rationalizes nationalism and how hard it is to go against such fascist regime shifts. Faith seems to play a big part in Franz’s decision to go against the Nazis and yet it is weaponized and used against him as a demand to serve. It is a difficult period where one feels so helpless, to the point that faith almost seems to be something that must be kept silent if it is not serving the will of the state. This deeply reflects the current state of Christianity which often plays fast and loose to make excuses for political actions and nationalistic tendencies. When Evangelicals are excited to have Donald Trump sign their Bibles, something certainly isn’t right within the flock. Franz also suspects something amiss and deeply uncomfortable about the direction of the country and has to decide how important his soul is that he’s willing to die for what he believes in.

A Hidden Life was based on a true story and rather than struggle to be as accurate as possible to such a retelling, Malick once more favors a tone far more unique. He lets us inside the character and embraces all his fears and insight. We get to see all the horrors and experience all the pain, giving great contemplation to the nature of war ravaging the philosophies of the humble, forced to choose between their life or their ideals. It resonates exceptionally well and is sure to be one of the brighter spots of his filmography.