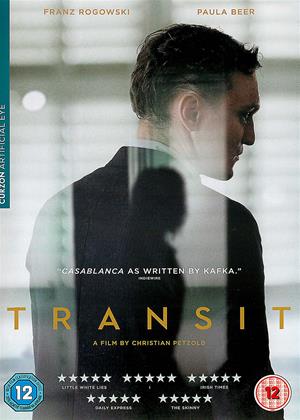 This very clever and absorbing film, the latest from German director Christian Petzold, is set in a surreal German-occupied present-day France. It's part political allegory, part romance, part thriller, and deals with such themes as loss, trauma, statelessness and historical amnesia - think 'Casablanca' combined with Camus' 'L'Etranger' combined with a JG Ballard-style dystopia. The plot circles around Georg (a transfixing Franz Rogowski), who spends much of the film dodging shock troops with the result that the conventional sense of historical time, with its reassuring sense of progress, has been undone.

The film is based on a 1944 novel by the German-Jewish writer Anna Seghers that draws on her experience as a war refugee, and Petzold's adaptation, situating it in a historically indeterminate moment, overlapping past and present, is done subtly but effectively - you don't need a swastika or a yellow star to get the historical / inhuman backdrop, whilst Georg’s growing attachment to a dead writer's wife, paralleled by his delicate, paternal feelings for a young boy (Lilien Batman) forcefully underscore the story’s topical political resonance.

Early in the film, a narrator (Matthias Brandt) begins talking as Georg reads the dead writer’s novel. The narrator’s identity long remains a mystery; he drops in now and then to add or explain, but not always precisely or reliably (some might find this irritating, of course, but I rather liked it). The typewritten manuscript pages are excerpts from Seghers’s novel, which opens up assorted mind-bending possibilities: Georg could be unwittingly following someone else’s script; or he's caught in a time loop or repeating history; or he could be living in a present that is inseparable from the past. Petzold’s answer may can found in the crowded consulates in which Georg waits alongside despairing men and women, caught in the stateless, agonisingly familiar limbo reproduced in today’s refugee crisis.

It's possibly a tad melodramatic at times (the director seems to think the audience needs a few chase scenes or someone screaming or whatever to keep us interested), and maybe it's just a bit too self-consciously Humphrey Bogart trading melancholic regrets with Ingrid Bergman, but on the whole this is powerful (and brave) stuff.

A tale of doomed love - Transit review by TE

The film takes a little while to engage the viewer but it is worth the wait. The love story that dominates the second half of the film is cleverly constructed and there is almost a 'Casablanca' feel to the interplay of loyalties and motivations.

The movie would be improved by the removal of the voiceover, which turns out to be the voice of the barman in a Marseilles bistro frequented by the main characters. It's unnecessary and actively annoying.

Quite an odd film, but not a bad watch - Transit review by giantrolo

This film had a very odd setting, turning a story clearly set in World War II right on its head by setting it in a modern day world full of polyester clothes, sleek cars and high-rise apartment blocks; and giving the main character who is trying to flee his oppressors a German accent in a French town. The main character, Georg, spends most of the film in a relentless but somewhat unenergetic search to escape France. There are some nice moments in the film, but generally it was so hard to follow and understand that it was a proper challenge to keep up. It may be a better watch if you've had the benefit of reading the book first (we hadn't). Not a bad watch, but I probably wouldn't recommend it.

Could not get into this film - Transit review by AA

Supposedly set in wartime France and uses modern day Marseille as the back drop to the action and the use of a voice over actor to keep the plot moving, I found my mind wandering on too many occasions from the plot.  Not a film I could recommend.