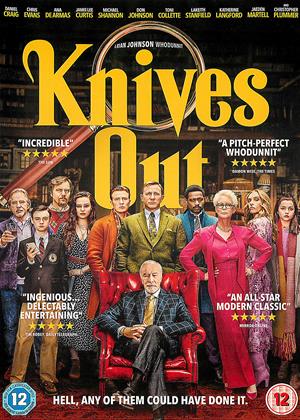 Utterly Brilliant who done it - Knives Out review by AL

Ok, so first off Daniel Craig's accent takes a little while to get used to, in fact my wife couldn't get used to it and left the room. But once you get past that, it's a real treat. Gripping all the way through, with many twists and turns and surprises. I'd love to live in the house where it is set. I wouldn't say no to a sequel of some sorts. Great cast as well and a different role for Michael Shannon, from the films I've seen him in. I'd heard it was good, but this was excellent.

A superb cast delivers this complex whodunnit in a light, entertaining and even amusing way. Never taking itself too seriously,  'Knives Out' serves up a highly engaging take on a good, old fashion murder mystery. A must see.

Very enjoyable, convoluted story. All the actors are great, but who decided to give the detective (Daniel Craig) a southern American accent. He made a real hash of it and it spoiled my enjoyment of the story. It was completely unnecessary, he could have been English for all it mattered to the story. If it doesn't grate on you all the way through, it's a good film.

Average copy of Agatha Christie, made American style! - Knives Out review by CS

This comes across to my mind as Americans making a poor attempt at copying an Agatha Christie story, and the storyline has been literally uplifted directly out of Poirot or Miss Marple! It's an interesting film, but the storyline was very convoluted ad kept going backwards and forwards, becoming quite muddy in the process. I personally worked out what was going to happen literally within the first five minutes, so for me the ed was no surprise at all and I do find that American films tend to be made for a less intelligent kind of audience, they often feel the need to spell it out to you! This could and should have been quite a good film, especially given the brilliant cast and good acting, however the one over-riding fact which completely killed this off, was the awful Southern American accent Daniel Craig attempted to do and which he kept slipping out of, why, because this spoilt the whole film. If he had stuck to his own accent it would have been far better! Quite slow paced and with a simple script, reasonably well directed, but as I say, time and time again, it was Daniel's awful southern drawl that really killed it off for me!

A entertaining whodunit - but nothing more - Knives Out review by LC

This is a decent enough murder mystery, very much in the Agatha Christie style, only without taking itself too seriously. The plot is suitably twisty, and keeps the viewer on their toes throughout, and there is a sprinking of current political debate in the illegal immigration subtext. As solid as it is however, I can't help but feel that it perhaps could have been something slightly more. Had it pushes a little harder, this could have done for the murder mystery genre what 'Scream' did for horror, but it just doesn't have that impact. Despite a great cast, only Daniel Craig is particularly memorable (thanks largely to a ridiculous but amusing accent), whilst most of the other characters don't end up making much of an impression - and ultimatly it doesn't come across as particularly filmic. Solid, enjoyable, and worth a watch - but ultimately no more so than a superior episode of 'Murder She Wrote', or several hundred other TV whodunits. (3.5 out of 5)

Deadly dull and incredibly irritating - Knives Out review by Alphaville

An aged writer is found dead and private eye Daniel Craig interviews a cast of talking heads, in a house, in close-up, to find out who dunnit. How this gets any favourable reviews is unfathomable. It would have been past its sell-by date in the 1950s. It’s completely devoid of flair and drama and is unrelentingly boring. It’s even played out to the most annoying Carry On muzak score that over-emphasises every beat. Only Inspector Clouseau could liven this one up. Who dunnit? Who cares?

Amazing - Knives Out review by MT

Watch this now. A great "who done it". Will keep you gripped until the end!! One of the best movies of 2020 so far.

Fully accept all the criticisms from other reviews, but for us we like to watch & get involved with a good story. We watched in 2 halves & took some guesses for the answers for the end - we were close with some but the story a little too complex to get it all. It works for us though & be happy to find more similar films in this style.

If you are looking for an action packed murder mystery then this wont be for you. If however you like the agathe christie style murder mystery of investigating a crime and all the little clues adding up and fitting like a jigsaw then I cant recommend this enough. The cast are all great and unlikeable as they are meant to be. Daniel Craig is great despite the dodgy accent. Knocked only a star off due to guessing the killer half way through but will still enjoyable.

A truly great who dunnit - Knives Out review by HK

Superbly cast film, great plot, great writing/ directing we both enjoyed this so much! One of the best films we have seen for some time, def ticked all the boxes.

Mutton Dressed Up As Lamb - Knives Out review by NM

The production, acting (maybe Craig's southern US accent is a bit dodgy), script, photography etc are all top quality. However, as is the case with a lot of current Hollywood films, the story lets it down. The story is interestingly convoluted, but when analysed it turns out to be rather simple and weak - a rich old man disinherits his family and seemingly commits suicide (or is it murder?). When the film reaches its denouement you feel let down - this is mutton dressed up as lamb.

Rian Johnson’s Knives Out is a love letter to murder mysteries. The director clearly has a passion for the genre, taking the medium and toying with all its quirks and spinning a wild tale of the whodunnit. What makes a great mystery work? After many a BBC series and countless Agatha Christie adaptations, I’ve come to the conclusion what counts most is the colorful characters and genuine spirit of surprise. On this level, Knives Out succeeds greatly.

Johnson wastes no time plunging us right into the juicy bits of this mystery. The very first scene showcases the aged Harlan Thrombey (Christopher Plummer) dead. His death has initially ruled a suicide. But Detective Benoit Blanc (Daniel Craig), armed with a Southern drawl, suspects foul play. The murder occurred just before the end of Harlan’s birthday with all his friends and relatives gathered in the house. Many have much to gain from his passing. The suspects include the cocky Hugh "Ransom" Drysdale (Chris Evans), the bitter Linda Drysdale (Jamie Lee Curtis), the conservative Richard Drysdale (Don Johnson), the liberal Joni Thrombey (Toni Collette), the desperate Walter "Walt" Thrombey (Michael Shannon), and the caretaker Marta Cabrera (Ana de Armas). Who could be behind such a scheme?

The film goes about weaving its twisty murder plot via flashbacks, tight editing, and biting dialogue. This is a very slick murder mystery that doesn’t waste our time by slowly establishing our characters before the murder occurs. We arrive at the case the same way Detective Benoit does, piecing it together from the interviews with the family. The entire first-act plays out as a darkly comedic Rashomon of spinning lies about their recollection of events and their feud with Harlan. Walt works alongside Harlan for his publishing business but can’t do much else and doesn’t know what he’ll do if he doesn’t have that business. Joni has spending problems and with a kid in an expensive school, she desperately needs some money for the long haul. Essentially, everyone is facing hard times and are counting on Harlan’s will to solve their problems. To them, it doesn’t matter who murdered Harlan so long as they get paid and maintain their lifestyles.

I’ll try to refrain from explaining too much more of the plot if only to maintain the brilliance in the twisty story that takes several turns. What I can say is that this ensemble cast is in top form. I absolutely adored Crain trying to put on a bayou accent in his dissection of the crime, always approaching each conversation with a dry charm that just melts my heart. Michael Shannon is such a great actor at seeming both intimidating and mad, trying to not show that crazy side behind those big eyes as he stammers towards stability. Ana de Armas gives off a chipper vibe despite being the quietest voice in the room with a quirk that is equal parts cute and gross. Chris Evans, having spent a lot of time as the stoic Captain America, really cuts loose in a role where he delights in watching his family rip each other to shreds. And the political back and forth between Collette and Johnson is a brilliantly savaging of a family bickering amongst itself.

Knives Out is a sinisterly sharp mystery. It never backs off from going the extra length of writing. When the characters get into politics, they go in hard (trigger warning for the Trump-loving folks). When staging the flashbacks, the editing is fast-paced enough to never bore and keep us engaged. It’s such a wild ride that by the time one discovers the true murderer of this plot, there’s far too much fun that a second viewing is all but guaranteed.