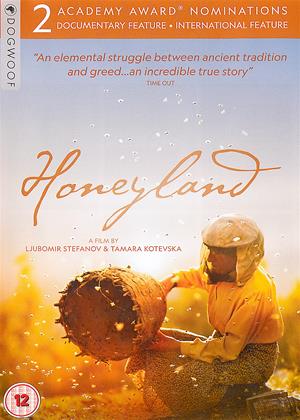 Synopsis:
In a deserted Macedonian village, Hatidze, a 50-something woman, trudges up a hillside to check her bee colonies nestled in the rocks. Serenading them with a secret chant, she gently manoeuvres the honeycomb without netting or gloves. Back at her homestead, Hatidze tends to her handmade hives and her bedridden mother, occasionally heading to the capital to market her wares. One day, an itinerant family installs itself next door, and Hatidze's peaceful kingdom gives way to roaring engines, seven shrieking children, and 150 cows. Yet Hatidze welcomes the camaraderie, and she holds nothing back - not her tried-and-true beekeeping advice, not her affection, not her special brandy.
But soon Hussein, the itinerant family's patriarch, makes a series of decisions that could destroy Hatidze's way of life forever.
Actors:
Hatidze Muratova, Nazife Muratova, Hussein Sam, Ljutvie Sam
Directors:
Tamara Kotevska, Ljubomir Stefanov
Producers:
Atanas Georgiev, Ljubomir Stefanov
Writers:
Atanas Georgiev, Tamara Kotevska, Ljubomir Stefanov
Others:
Atanas Georgiev, Fejmi Daut, Samir Ljuma, Ljubo Stefanov, Tamara Kotevksa
Aka:
Medena Zemja
Studio:
Dogwoof
Genres:
Documentary, Drama, Special Interest
Countries:
Republic of Macedonia, Top 100 Films, Documentary, Drama, Special Interest
Awards:

Directed by Ljubomir Stefanov and Tamara Kotevska, this film is a documentary about the life and labours of one Hatidze Muratova. Originally commissioned to make a video about conservation efforts in Macedonia, the filmmakers apparently spent three years with Hatidze, and as a result, the film is great at recording the rhythms and textures of rural life, the directors shaping their observations into a neorealist fable; an impossibly stirring tale of struggle, persistence and change.

Hatidze lives with her mother Nazife, who is bedridden and partly blind, a dog named Jackie, a few cats, and ... quite a few industrious bees. Hatidze’s methods are intimate and humane; she’s endowed with a loving touch that, seemingly, the bees and the other animals recognise. She speaks to them and sings to them, but, above all, she nurtures and nourishes them, telling the bees, “half for you, half for me”, treating the hives that she sustains on another rock wall, alongside her home, with familial care. And Hatidze isn’t entirely isolated from the rest of the world. Skopje is only a little more than 12 miles away, and she travels there, on foot and by train, to sell her honey. Because of its superior quality and her shrewdness, it fetches a good price. But just as we are settling into Hatidze’s company, appreciating the edges and contours of her personality and savouring the deep pleasure of her work, the pastoral calm is shattered by a family rumbling into the village in a noisy trailer that turns out to be the quietest thing about it. At first, Hatidze welcomes these neighbours - Turkish speakers like her, but the the sheer chaos that surrounds them conspire to disrupt Hatidze’s routines. From this point the film unfolds with a novelistic intricacy and tightly sprung dramatic mechanism, and we get caught up in its destructive power, its brewing enmities, and its overarching, tragic sense of the disturbance of cosmic order.

Films of this kind inevitably raise questions - I found myself wondering what she thought of the filmmakers who were following her on this perilous mission—how she and they arranged the shooting, and what effect the filmmakers’ presence had on her. Solitude is one of the film’s prime subjects and also its dramatic mainspring, and its details and practicalities are merely hinted at, and rather unexplored. Much of the movie is filmed in the Muratova home; Hatidze displays the daily details of her domestic life and her labours to the filmmakers, who must have virtually lived with her for the time while they were filming. But the terms of their complicity, the relationship that they and Hatidze share, remain a somewhat frustrating blank. However, for all of this, this is powerful, intriguing work.

Restores faith in the medium of film - Honeyland review by TE

Every so often a film comes along which defies conventional analysis. The 'docu-drama' genre is a good source of such films, and Honeyland is an outstanding example.

The review by PD contains a lot of helpful detail, and an important questioning. Ultimately the film succeeds on several levels, from the visually stunning cinematography to the allegorical message implicit in the despoiling of Hatidze's bee colony.

This is simply a magnificent example of the power of film to inform and to advocate.

Stunning portrait of a dignified woman whose life is beyond anything I have experience of, beautiful and very moving.

Where reality is inseparable from fiction - Honeyland review by RH

3 years to make a movie, wow. nothing worth doing is ever easy

This is a real triumph of capturing what must be a fast disappearing world in Macedonia and the Balkans. Ironically The challenge to Hatidze and her bees is less modernism than the movement of a large and rather chaotic family and their cattle who take up residence nearby. The treatment by the film of the family is compassionate, but steadily Hatidze's life with her bees is eroded, although there is hope of a return to normality by the end. The film is quite raw and unsentimental at times, but brings out the humanity of all those involved. The relationship between Hatidze and her ageing mother is beatifully told. It must have been tricky to get the bees to follow the script, but generally they seem to behave quite well!

This is a beautifully told story of rural life in mountainous Macedonia where a single woman ekes out a frugal existence while caring for her aged and bed-ridden mother. Her sole income comes from the sale of honey which she collects from her hives and wild bee-colonies; it is interrupted by the arrival of a livestock farmer next door who tries to set up bee hives in competition.

The worry of the damage done to bee stocks by this development is gently counterpointed by the affecton she feels for the young children of the farming family who are also suffering from poor agricultural market conditions; eventually they fail and have to move back to the city.

The intimacy of the tale is highlighted by wonderful photography and a sympathetic examination of rural life in the Macedonian highlands.

Loved this movie from the minute I saw the trailer. A really good insight into the life and work of the last wild bee hunter in Europe. The scenery was breath taking

Stepping into another world - Honeyland review by SD

Stepping into another world and seeing the conflicts of drastically different approaches to life. Such a powerful way of showing how life has changed and what is needed in the world namely respect for nature.

The main character is such an interesting woman.

An aside, I was left with a great yearning for proper honey like you never see normally.