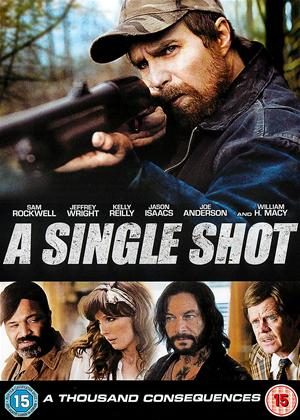 Reviews of A Single Shot

A Single Shot follows hunter John Moon (Sam Rockwell) who finds himself facing a group of merciless outlaws when a hunting accident turns into so much more. With blood on his hands and no way out of this situation he must face off against his new found enemies using the skills that got him caught in this circle of violence in the first place.

While Rockwell has been on a winning streak lately with some wonderfully out there characters, A Single Shot returns him to his dramatic turns and while the film builds around his tragic and flawed character there is little to Rockwell’s version of the man. He is empty and lifeless, something John seems to be at the best of times but there is little emotional depth to this version of him as Rockwell keeps things so contained that he rarely even adds a little character.

That being said the film paints such a bleak picture that its easy to realise why John is the way he is, the landscapes are grey, green and devoid of any kind of life and the feeling of isolation is so strong there is very little to keep you hopeful of any possibility of a decent outcome. The film lacks a tone that could make the film enjoyable as it tries to sap the life out of every little aspect to ensure you know this is a thriller.

All in all the film is a decent look at the isolation of the hunter and the way it can strip parts of you you didnt even know you needed but in the end the film lacks a compelling story to push things along and while watching John use his wits should be interesting it doesn’t help that the film never once tries to make you like him.