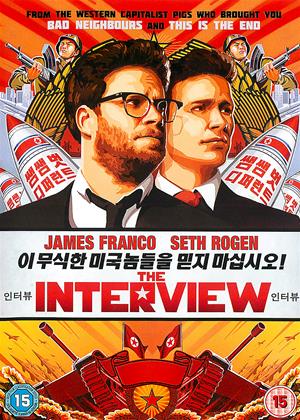 Reviews (3) of The Interview

Over rated - The Interview review by gazmb

I can see why Korea doesn't like it but its so over the top its pathetic that they reacted so badly to it. Just shows how weak they are. For me it was ok but not the best comedy I have seen .

Pathetic. - The Interview review by CP

If this is American humour of the 21st century, I'm glad I grew up in England in the 20th. If you like slapstick and obvious jokes, this is for you. I would imagine the North Koreans were hacked off because it's such a poor film as much as anything else.

This is an excellent film - funny, well-written, and the sort of comedy the UK seems incapable of making (as its film industry was incapable ot making funny family comedies like Touchstone in the 80s and after).

Yes, it's crude and lewd (too much so for my taste). But it is also laugh-out-loud funny. The slapstick is like a crude version of Laurel and Hardy. The cameos (Eminem et al) are top notch too. I watched this movie with an elderly lady who, despite the crude gags and violence, really enjoyed it and laughed out loud too. I think you just have to GET satire to enjoy it, and so many these days - raised on dumb, unfunny, pc BBC2 'comedy' - just don't.

The movie has a serious message too - this is a really decent satire NOT ONLY on the awfulness of North Korea (and by extension all dictatorships, like the Islamofascist ones the woefully misguided lefties in the UK want to hug and appease as fellow Israel-haters) but also on American culture, especially inane celebrity culture.

This is a bit too long. Plus the actor who plays Kim Jung-un speaks American English too well and has American teeth too. HOWEVER, these are minor gripes.

The Interview appears to be the most controversial film of 2014, rivaling that of the white-washed Exodus or the urbanized Annie. This isn’t the first movie using North Korea or its leader as a target, but this comedy takes deliberate aim at the assassination of Kim Jong-un. After the recent hacking into Sony Pictures and a major threat to the US for screening the movie, The Interview was pulled from major theater chains. Mere days before the movie was supposed to debut, Sony allowed the film in both a limited number of theaters and online through video-on-demand services (not uncommon for limited release movies). For a while the film was rated incredibly high on IMDB and praised by many Americans as a win for patriotism in not cowering to terrorist threats. But after such a rocky road to the big screen, how was the film itself? Was it worth all the build up and controversy? Not quite, but it’s still a decent comedy.

Dave Skylark (James Franco) is a popular Entertainment Tonight style talk show host. His producer Aaron Rapoport (Seth Rogen) helps him land the biggest and shocking interviews of celebrities revealing their sexuality and toupees. After being shamed by one of his journalistic rivals, Rapoport decides he wants Skylark to take on some more serious interviews for his program. It just so happens that a big admirer of the show is the North Korean leader Kim Jong-un (Randall Park) and Skylark is eager to interview him. Rapoport goes to great lengths getting the approval of North Korea, but he and Skylark soon have all the ducks in a row for the most exclusive interview on Earth. Before their visit, however, the two are coaxed by the CIA into assassinating Kim upon conducting the interview via poison passed through a handshake.

Rapoport takes the mission seriously, but Skylark is more concerned with how he’ll appear on camera. His request for receiving a gun and shooting Jong-un on live television is denied for his limited knowledge of these operations outside of action pictures and the desire for a grand kill for the cameras. Once they arrive, they are treated to the strict rules of meeting the great leader and clearing up misconceptions of the country. Addressing the starvation, their limo stops at a grocery store that is clearly a fake. Rapoport just smiles and nods knowingly while Skylark does so more genuinely out of his ignorance. While Rapoport attempts to woo one of Kim’s female advisers (Diana Bang), Skylark gets to know Kim a little better. The two shoot hoops, smoke weed and take a tank out for a test drive. They form a bond that is more than just party buddies, but that of two men with similar self-image issues. Both just want to be taken seriously and don’t feel they are working to their full potential. Naturally, this complicates the whole let’s-kill-a-dictator scheme.

Unlike the previous comedy directed by Evan Goldberg and Seth Rogen (This Is The End), the bulk of this comedy feels well-structured and character driven. It goes for a few of the expected low-brow gags involving drugs and bodily function, but they rarely miss their mark and never overstay their welcome. There are a few let’s-party montages edited in the typical fashion with rap music attached, but they’re mercifully short. For satirizing a real life dictator, there are a handful of expected jokes. It’s no surprise to see Skylark hop in Kim’s tank and hears a Katy Perry song on his sound system. But it’s far more than just a tired mockery of a dictator approving of a girly song. Franco says he loves her songs too which leads to a small duet, but they then connect more over what the song means to them. Silly to be sure, but it elevates the movie from just being a string of random “get a load of this guy” jabs.

The few gags that don’t work are the ones that harp a bit too long on one joke, seemingly stammering and improvising for as long as it takes for a laugh. At one point Rapoport is forced to conceal an object up his rectum before the Korean military find it on him. The sexualization of the process goes on just a hair too long as do a few bits of back and forth between Franco and Rogen. The amount of puns and groin references are in high volume, but they’re delivered with enough character by the duo to make such base comedy warrant a laugh. Special praise should also be given to Randall Park who certainly doesn’t phone in his performance as Kim Jong-un, nailing the vicious dictator as both a deadly madman and a spoiled manchild.

What The Interview lacks in saying something meaningful of our times, it makes up for with a solid comedic script. It may not bite hard enough for some slick satire on North Korea, but the movie serves its purpose well enough as a current events setting for some character-driven comedy with a dash of action. It’s very crude and incredibly violent, especially in a fight scene that appears almost to be a competition of how many fingers can be bitten off. I wouldn’t say it’s worth its claim to fame as the movie that nearly resulted in terrorist attacks, but it won’t disappoint those seeking a handful of laughs from a slightly more competent raunchy comedy.