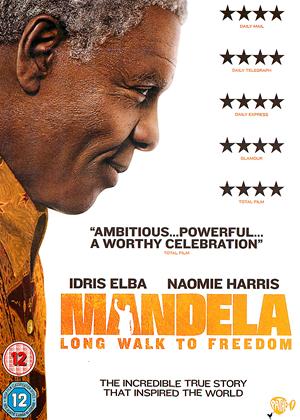 Rent other films like Mandela: Long Walk to Freedom

This is an at-times plodding biopic of Nelson Mandela, good in parts and interesting, but spoilt by overbearing Hollywood blockbuster music and the Hollywood-by-numbers script.

The film does address the issue of the murderous Winnie Mandela, but it is far too generous to her (she has been convicted of killing children, after all...)

It also only touches on Nelson Mandela's belief in violence which was stronger than shown here back in the 1950s (he changed his mind on that in prison). It completely leaves out the communist sympathies of Mandela and the ANC too. It ignores massive ANC brutality and corruption, and that of the extended Mandela family too: it tries to make them a 'first family' of a saint, in effect.

Having said all that, any biopic of Mandela was always going to be a hard ask, and this one is competent at least. Good acting all round. Though some confusing parts - especially at the beginning - and why are we never told how Mandela got the name Nelson?

I sort of preferred the movie 'Invicta' which is about Mandela's time in prison and his relationship with a guard. However, this movie had to tell a whole life story, which is always tricky, and why the script focused on easy villains (whites) and heroes (all blacks).

Too long really too, as usual for Hollywood movies.

Worth a watch so 3 stars.

When filming began on Mandela nobody could have known that in the months leading up to its release that Nelson Mandela would unfortunately pass away. That being said, it adds a certain credence to the films inspirational story, one that is grounded by arguably Idris Elba’s finest performance to date as the titular anti hero.

The film follows Mandela (Elba), a well respected lawyer and member of society as he begins to take on the racially biased views of South Africa and the white community that ensured that society maintained this inequality. Chronicling his life as a peaceful protester, a freedom fighter and a prisoner, Long Walk to Freedom shows the man, the good and the bad behind a great man.

Not only doesn't Mandela show the early nature of the man but it also devotes a hefty chunk of the film to his wife and fellow activist Winnie Mandela (Naomie Harris), a tragic character changed by Nelson but also by circumstance and control. Her push to remain a devoted mother and wife is twisted by a government intent on punishing Nelson through the only person left that is close to him.

It doesn’t paint a perfect picture of the man, it rarely glorifies the actions he takes but it does show a South Africa filled with hate, turmoil and corruption, one that needed a face to bring about change, only nobody knew that that face would be his. Elba makes Mandela a man of subtle conviction and unending empathy and thats the man you should take away from the film, a man who understood and connected to the people he was trying to help but also recognised their limitations as well as his own.

Filmed with rich colours and beautifully vivid wide shots of South Africa and the beauty it has to offer, Mandela is as much a story about the country as it is the man and with this final character director Justin Chadwick shows what they were really fighting for.