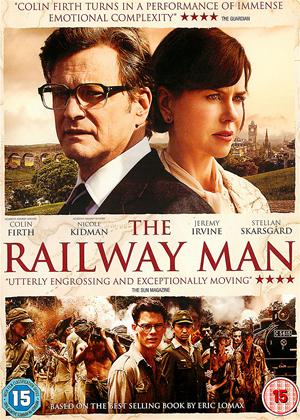 Reviews (4) of The Railway Man

An excellent, understated film about torture and reconciliation - but the book is far, far better - The Railway Man review by RP

This is an excellent, understated film that explores the trauma that afflicts the men who endured the inhuman treatment meted out by the Japanese to prisoners of war during the Second World War. Because it is so understated, with no crash-bang-wallop, no thriller or action element, it won't be everybody's cup of tea. But I liked it.

It is based on the experiences of the real life Eric Lomax and more specifically his autobiography, also titled 'The Railway Man', published in 1995 when he was 76 years old. And having read the book, the problem that I have with the otherwise excellent book is what it leaves out - and what it leaves out is the magnificent detail of Mr Lomax's life, his highly varied and rich career, his long first marriage, his children and the welcoming step-family he gained on his second marriage. The whole story has been compressed (for perhaps valid dramatic purposes) and even the characters' lives are compressed - for example, when he first met his second wife in 1980 Mr Lomax was 61 and not the sprightly chap portrayed by Colin Firth. The tale of how he first learned what had become of the Japanese interpreter Nagase Takashi starts on page 238 and takes up 39 pages of the paperback copy of his autobiography. The film even leaves out that Lomax had read the book that Nagase had written of his experiences from the 'other side'.

These shortcomings aside, the film tells how a victim of torture comes to terms - over a period of many years - with both himself and his enemy, and is a powerful story of both suffering and reconciliation.

The real history of the prisoners working on the Burma-Siam railway is forever overshadowed by the film 'The Bridge on the River Kwai' - I do recommend that you see this film, then read Eric Lomax's book. Frankly, the book is far, far better than the film - but I'll still give the film 4/5 stars. I found it very moving.

[Aside 1: my father, a now very elderly veteran of the Second World War, to this day refuses to have any Japanese-made item in the house. I gave him a copy of Eric Lomax's book when it was first published - he read it, but it didn't change his opinions.]

[Aside 2: (changing the topic almost entirely) Pierre Boulle, the French author of 'The Bridge over the River Kwai', also wrote 'The Planet of the Apes'.]

This film is very wordy and theatrical - and I can see that one of the screenwriters is Frank Cottrel Boyce who tends to write very worthy and theatrical TV and radio plays, I think.

A far better drama is Bridge on the River Kwai - a great film albeit inaccurate - and Merry Christmas Mt Lawrence. This is all too psychotherapy-infused with long pauses and a failed attempt to add dramatic tension with a knife (how on earth did he get it through customs though?) As in most such dramas, the prison camp looks too clean and the prisoners too well-fed and healthy too.

Colin Firth looks ludicrously young to play a 61 year old man too, meaning one's suspension of disbelief is severely tested. That meant I just didn't believe the character - just as I did not believe how Lomax met his wife (actually, these days he'd probably be arrested for stalking or harassment, such are the obsessions of our pc police).

I can imagine that the book would be a good read - and far better than this film, which is unmemorable and wordy to the point of boredom: a shame for such an important subject.

As a drama, this film does not really work, I'm afraid, but is worth a look for curiosity value and interest. The story of the Burma railway needs to be told and retold - in Japan most of all.

The book must be better - The Railway Man review by BE

Boring and unconvincing. Besides looking relatively healthy and well fed, the prisoners of war appeared to have managed to shave every day which defies belief given their situation. This did not bode well to set the scene. Nicole Kidman have her usual stuffed doll performance and I don't think the disjointed presentation enabled Colin Firth to give of his all either.

Plodding to the terminus - The Railway Man review by AS

This type of tale has been done before and much better. The direction is pedestrian and Colin Firth's performance wooden. The placement in time also seems very odd, the 1980s locale appearing much more like the 40s or 50s. The greatest pity is that some of the prison camp scenes are stilted and their background unconvincing, while the torture scenes become gratuitous. Overall, with such a scant plot, at almost two hours the movie is far too lone.